There's definitely an interesting beat to The Dresden Files. It's a card game, and in that it feels familiar. But the way it lets you team up with other players gives it a freshness, especially on mobile, that sets it out from the crowd.

When you're playing a solitaire game, some of that excitement doesn't quite manage to shine through. But get some friends involved, and this is one of the most entertaining board game adaptations the App Store has to offer.

There's a grid of cards in the centre of the screen that represents the case that you're trying to solve. There are a number of different kinds of cards, and you need to deal with them in different ways.

Foes you take down by attacking them. Obstacles need to be removed from play. Advantages can be grabbed and used, while the actual investigations need to be tackled with, well, investigation. 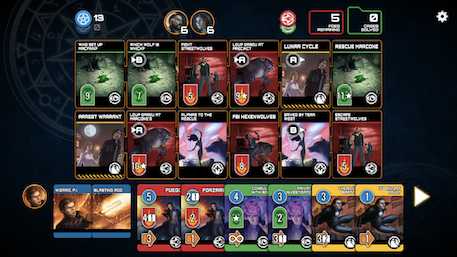 There's a colour scheme here as well so you always know what you can use to take down the things standing between you and success. The aim of the game is to solve more cases than there are foes remaining.

The different detectives have different special moves as well. Some of them trigger when you perform an action in the game, others you need to use when you've got the chance. It adds an extra layer of strategy that keeps things interesting.

You get a twist in the tail as well. Once you've used up all your deck, you come to the showdown. Sometimes you'll have already won the game by this point. If not you need to try and turn the score in your favour. Fail, or get a draw, and the AI wins.

There's an awful lot to like in The Dresden Files. It plays around not just with the shape of a card game, but with the stories of the books. And that's something that die hard fans are going to love.

If you've never read any of the books then you might find yourself a little bit lost when it comes to the theme here. The art is great, and the bad guys seem interesting, but you'll never really get a proper feel for them without the grounding of the novels.

Still, there's fun to be had whether you're a fan or not. And battling it out with real people instead of against them gives the game the edge it needs to recommend.

On your own it's pretty good, but play with some friends and The Dresden Files is pretty darn special
Next Up :
Nacon MG-X Pro Mobile Controller review - "A practically perfect mobile gaming controller"

There’s a Dresden Files card game coming to mobile, and here's everything we know about it