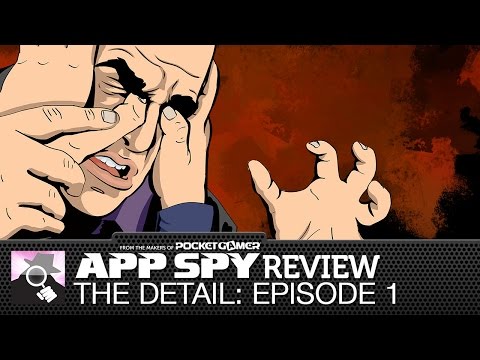 The Detail: Episode One - Where The Dead Lie is a grim and gritty mash up of point-and-click adventure and interactive comic book.

There are corpses to poke, child molesters to blind with your thumbs, and a cast of characters who all inhabit the grey area on the morality scale.

It's a little on the short side, but if you like your police procedurals rain-soaked and full of violence and gore, there's a lot here to like.

You play a number of characters as the game unfolds. There's a detective with a moustache who plays by his own rules, a retired gangster who keeps getting pulled back into his murky past, and a rookie cop who keeps ending up in the wrong place at the right time.

The story is one of murder, drug deals, gang lords, police corruption, and the cycle of violence, all set against a backdrop of graffiti-tagged streets and never ending rain showers.

It certainly creates an atmosphere, and the story is entertaining enough that you'll happily plough through it in a single sitting.

There are some really tense set pieces here, usually involving choose-your-next-move fights. Do you swing a punch or gouge an eye? Do you chase the man who shot your partner or follow the crim you're more likely to chase down?

There are a number of points in the story where your decisions change the direction that things are heading, and there are probably a couple of playthroughs here if you want to see everything.

The Detail: Episode One - Where The Dead Lie sets things up nicely for the rest of the series. It's sharp, very well written, and you're never quite sure what the cast of characters are going to do next.

Some point-and-click purists might lament the lack of any real puzzles, and as I said before, it's pretty short. But if you're looking for a solid, well told story of crime, violence, and justice, it's definitely worth a look.

A dark and grimy adventure with some real tension, The Detail: Episode One - Where The Dead Lie might not have any tricky puzzles, but its story will pull you through
Next Up :
REDMAGIC 8 Pro review - "A beast in performance, but not without growing pains"

The Detail's neo-noir crime story continues with Episode 2 - From the Ashes, out now

An early look at The Detail - a seriously dark crime thriller