You won't be surprised to learn that Gameloft has borrowed some ideas from another Batman game for its Dark Knight Rises tie-in. You don't need to look very closely to realise that the team was heavily inspired by Rocksteady's Arkham games.

That's no bad place to source ideas, of course. Arkham Asylum is probably the best Batman game ever made. But The Dark Knight never escapes the shadow of its influences.

Take the stealth element. When you take a mission from the Gotham city overworld, it's never very smart to head straight into a fist fight without checking the surroundings first. Dark Knight Rises encourages you to take out snipers, shut down security cameras, and erase gun-toting baddies before entering a brawl.

Not the game Gotham deserves

It certainly captures the essence of Batman, but you don't have as many tactical options as in the Arkham games. The Dark Knight can't dangle from rooftops, sneak about under grates, set up explosive traps, or snatch bad guys while perching on gargoyles.

On mobile, he pretty much just uses batarangs, his grapnel, or a handy dive bomb attack to rid the area of nuisance goons.

The one-on-fights are even less sophisticated. You basically just bash on the same button until you win. It has counters, but they're poorly presented.

Arkham used clever visual and audio cues to alert you to incoming attacks. Rises flags up a counter opportunity by putting an extra button on the screen.

It means you don't get to watch the cool fighting animations: you're watching a bunch of buttons. It's also very particular about when you get to use your items during battles, which means it's extremely tough to take out enemies with guns.

And not the one it needs, either

It all makes for a game that's competent but not particularly fun. In the end, missions boil down to a repetitive series of battles in which you take out snipers and then dive in and beat up the remaining baddies with a flurry of button taps.

It feels like a cheap clone of a proper Batman game. That's a motif that carries across the whole package. The music sounds okay, but it's not actually done by Hans Zimmer. Gotham City looks swish, but get down to ground level and you'll find it's a ghost town. The characters (sometimes) look like their Hollywood versions, but they rarely sound like them.

The game is also loaded with in-app purchases. Maybe it's fitting that Bruce Wayne can buy his way out of a fight, but they're pretty egregious all the same. If you don't pay extra you'll have to grind your way through loads of dull-as-dirt side missions to upgrade Batman.

The Dark Knight Rises is a perfectly playable game, but it's uninspired, unimaginative, and often just boring. Don't expect this to rise above the standards of your common movie tie-in. 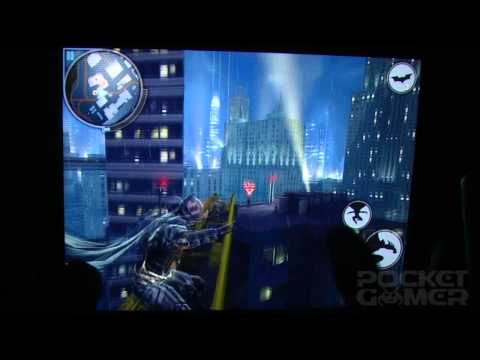 Dark Knight is a pale imitation of the Arkham games, with boring combat, cheap presentation, and dull missions. It works, but it never thrills
Next Up :
Netflix Oxenfree review - "Reading the signals of a thriller story"

Be the Bat in Gameloft's latest film tie-in, out tomorrow on mobiles