Spider-Man is back, but he's looking rather less amazing than before.

Where the 2012 film tie-in The Amazing Spider-Man pushed the boundaries of what mobile could do with open-world gaming, its sequel (also a movie tie-in) feels like a backwards step, bringing little new to satiate wannabe superheroes.

Spidey's Manhattan playground has grown, for sure, is it still fun to play there? 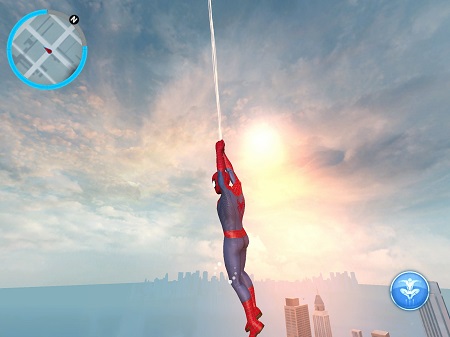 Oh, me? I'm just hanging around, waiting to connect to Gameloft's servers

You sling and swing from clouds through six detailed - but still sparsely-populated - districts that vaguely resemble New York, rattling around in the vaulting gameworld completing cookie-cutter quests.

A radar in the top-left of the screen points you towards available missions. Red dots are for optional and short quests such as signing an autograph (yes, really), stopping a car theft, beating up some generic gangsters, or providing a personal ambulance service to the good people of New York. Blue dots indicate compulsory story missions.

The game follows the film's basic plot, with some added details to expand upon the story. But it replaces much of the drama, tension, and rip-roaring action with awkward blocks of exposition and button-mashing fights.

Even the extra villains with their own zany subplots can't prevent the whole tale from being stretched paper-thin in a vague attempt to justify the premium price point.

You control Spider-Man's movements with a stick on the left of the screen, while a single button on the right handles jumping and swinging. This button on the right is replaced by three others during combat - one for counter-attacks, one to shoot strands of web at your foes to slow them down, and the last to punch/kick. 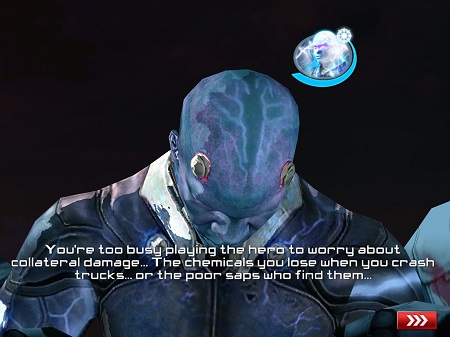 Won't somebody please think of the mutant mega-villains

Spider-Man moves with suitable grace and speed, but there's a lack of subtlety in both fights and general getting around, and the camera never seems to be quite where you want it - even after dragging your finger across the middle of the screen for a bit of manual tweaking.

It's generally effective simply to mash buttons indiscriminately while pointing Spider-Man in the direction of one or more enemies, too, although you can get the job done faster with some special combo attacks that can be unlocked with Spider Points.

Each completed mission gives you a small number of Spider Points, which you’ll need to buy items that restore health or put Spidey in his hyperactive Super Status mode (wherein he moves faster and hits harder) as well as to unlock and upgrade skills in six categories.

These skills get progressively more expensive, but you should be able to unlock most of them by game's end without resorting to grinding or in-app purchases. That said, you need to complete some of the red side missions in order to unlock more story quests - and these are so repetitive that they often feel like forced grinding.

The tournament-style Mysterio's Arena provides a little something different, pitting you against wave after wave of gangsters for rewards and ranking on a global leaderboard, but each spin in there costs a ticket that's worth 1000 Spider Points. And you need a persistent online connection throughout your play, regardless of whether you use this mode.

The Amazing Spider-Man 2 is let down time and again by lazy (or perhaps rushed) design choices that make Spider-Man recycle the same dozen jokes ad infinitum during the same six or seven missions that you repeat over and over in different locations around the map.

It's long for the sake of being long, and this is compounded by a lack of variety.

In some ways The Amazing Spider-Man 2 is a successful sequel, in that it expands upon its predecessor. But it expands too far in terms of size and not enough in terms of gameplay, stretching the fairly vacuous premise until you can see right through it.

The Amazing Spider-Man 2 looks good and plays well, but it's deathly boring over the longer term.

Despite solid controls and presentation, The Amazing Spider-Man 2 lacks any sort of heart and soul, and its repetitive missions lend this open-world adventure a pervading sense of dullness and drudgery
Next Up :
Hero Emblems II review - "Lovely visuals and music, but match-3 combat lacks strategic depth"

[Update] Our IAP sense is tingling: The Amazing Spider-Man 2 now out for iOS and Android

The Amazing Spider-Man 2 will swing onto iOS, Android, and Windows Phone on April 17th

Spider-Man shows off all his web-slinging combos