iOS + Android
| The Adventures of Tintin: The Secret of the Unicor

It shouldn’t come as a shock to know that one of cinema’s greats, Steven Spielberg, loved Tintin as a child.

The books were (and still are) packed with the kind of adventure, mystery, and surprises that make for riveting reading for a child, and while some elements are showing their age (the casual racism in some books is a sign of the time they were written in), the plots are action-packed and exciting enough to still be relevant today.

What’s more of a shock is that Gameloft - a company not known for surprises or innovation - has managed to pull off possibly one of the best and most imaginative film tie-ins I’ve played for years.

Stay close to me, Snowy

The Adventures of Tintin: The Secret of the Unicorn - The Game (from now on, just 'Tintin: The Game') follows the plot of the film closely, cherry-picking scenes from the film and expanding them out into full levels.

So one minute you’ll be playing as Tintin, sneaking around an old mansion, while the next you'll be sword fighting with pirates as Sir Francis Haddock.

Each level is glorious to look at, with character detail that far exceeds most iOS titles. Special effects like depth of field make it feel at times like you’re actually playing the CGI film.

The part where you navigate an electrical storm is particularly jaw-dropping, with clouds that billow and drift ominously as you dodge lightning strikes in your tiny plane.

This quality of presentation is accentuated by the score from the film, which adds extra gravitas to every moment in the game, whether you’re engaging in one of the many entertaining quick-time moments, or just scanning the horizon for clues in the desert.

From start to finish a few hours later, Tintin: The Game never stops throwing up new and interesting things for you to do.

For the most part, you’ll be playing as either Tintin or Snowy, creeping around locations using the virtual joystick and buttons that are (brilliantly) designed to look like old stamps, but then the game will suddenly introduce a puzzle, or swap characters, or throw you into a bout of camel racing.

There are even moments when the game turns into a 3D version of Cut the Rope, and these are as entertaining as they are surprising.

While most of these sections are quick to appear and last just the right length of time, Tintin: The Game falls down a bit during the aforementioned sword-fighting section, which is too basic to sustain your attention for the many, many fights you’ll encounter during this part of the game.

In general, though, Tintin: The Game comes across as a title that’s received a huge amount of care and attention - a rarity in one of the most commonly slapdash of genres.

Take the many cut-scenes, for example. Rather than force you to sit patiently while it rattles off the current bit of plot, Tintin: The Game places coins and jigsaw pieces around the scenery, which once tapped unlock special puzzles from the main menu.

It’s a small addition, but it means you’ll be constantly paying attention to the game, even when you’re not actually controlling anybody, as one glance away could mean failing to unlock another of the attractive character models to view.

It’s just a shame that the cut-scenes and dialogue in general are sullied by some incredibly bad voice-acting, which is both hammy and lacking conviction. If this is the real cast doing the sound, then I’d probably walk out of the cinema early.

But as long as you can put up with some of the most wooden lines since the 1920s, Tintin: The Game offers up a fun family adventure that does justice to its licence. 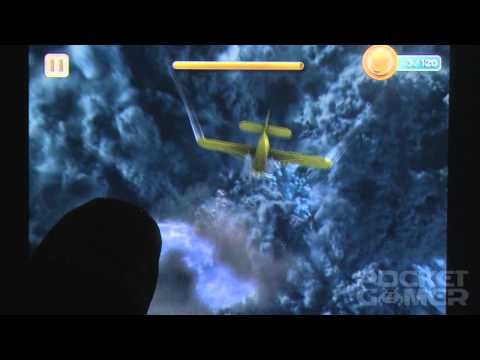 One of the best film tie-ins for a long time, and one of Gameloft’s strongest games this year. Both fans and newcomers to the boy reporter’s travels will find plenty to enjoy with this stylish adventure
Next Up :
Netflix Oxenfree review - "Reading the signals of a thriller story"

The Adventures of Tintin: The Secret of the Unicorn

Gameloft's gorgeous stealth-puzzler The Adventures of Tintin: Secret of the Unicorn - The Game goes live for iPhone and iPad

The Adventures of Tintin iOS and Android game trailer