It's easy for platformers to become repetitive and stale, especially indie ones. Head from one end of the level to the other, pick up tokens/collectibles, get points, and so on.

The Adventure Pals is a platformer, sure, but it's done in such a way that it makes the genre feel fresh and fun, and it's got a killer art style to boot.

The Adventure Pals is an action and adventure game where you've got to rescue your dad from a madman who wants to turn him into hotdogs.

Together with Sparkles the giraffe and your rock friend, you have to work through multiple different levels filled with all sorts of enemies, coins, cupcakes, challenges, and the occasional boss fight.

The obvious thing to note here is the game's striking, cartoonish art style that's bound to have taken a little bit of inspiration from Adventure Time. 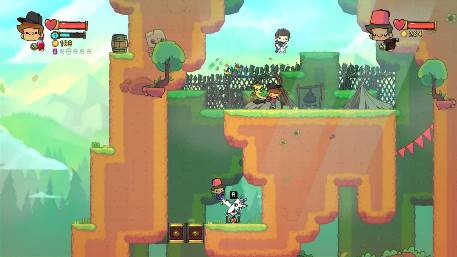 While the platforming and combat elements make the game fun, its lively environmental and character design take it to the next level. It's bright, bold, colourful, and weird in all of the best ways.

The controls are simple and responsive, and there's an efficient tutorial. You have to master jumping, switching up potions, using your sword, and interacting with things with 'R', and that's about it.

As you progress through the game and collect XP, you'll level up and be able to pick out skills and abilities for your character, like giraffe neck grappling and extra backpack space. Though they feel a little loose to begin with, you quickly realise that it is a useful system as more options open up.

Though its main level music gets a little samey after a while, there are moments, such as the fox band's jam session, where it's really lovely to just sit back and listen.

By far my favourite thing about the game is its drop in/drop out co-op feature. I'm usually a solo gamer, but playing this with my partner is an absolute blast and we laughed a lot throughout thanks to the witty script.

Even without another person, the levels never feel unfair or like they're built for two, nor do they feel insultingly easy when you've got a buddy to play with. It's a nice balance and the short, snappy levels have a lot of extra bits and bobs to explore and collect.

The combat follows a similar thread in terms of balance and difficulty. Sometimes you have no idea what's going on when surrounded by enemies, but you never feel overwhelmed.

You collect coins to buy items such as health potions and bombs at the shop, cupcakes to feed to the Cat King in exchange for costumes for your rock friend, and XP to help you level up.

One thing that made me almost irate was actually setting up the two-player mode. Though it's partly the Switch to blame, in order to play with one Joy-Con each I had to rearrange my grip on the console which felt a little long-winded. 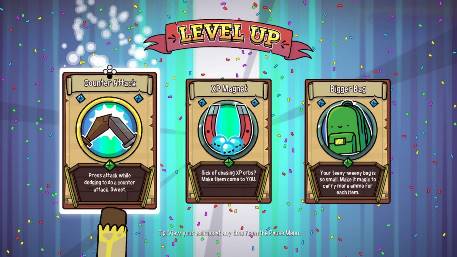 Usually with these sorts of games you connect automatically or choose the option on the main menu, and it took us a little while to figure it out.

On occasion the characters felt a little slippery, especially when leaping onto smaller ledges, but after a little bit of practice this became less of an issue.

The Adventure Pals is a brilliant platformer which offers up a pretty chilled and fun experience that really doesn't take itself seriously.

Its jokes are lame in a good way, its art style makes you feel all warm and happy, and the fact you can enjoy it equally both alone and with a friend is wonderful.

The Adventure Pals may not be particularly challenging, but it's a tidy platform that wants you to have fun with it
Next Up :
Hundred Days review - "A success for the management genre"