Given that Tetris has already made an appearance on almost every format under the sun - including iPhone - you might expect an iOS re-release to adorned with an abundance of new knobs and bobs to sweeten the deal.

If the early App Store reviews are anything to go by, however, it would appear a host of new in-app purchases and a subscription-based service weren't entirely what most Tetris fans had in mind.

In terms of pre-launch hype and hysteria, Tetris's new T-Club – available for £1.99 for a month, or £20.99 for an entire year – has been the game's headline new feature.

In reality, it plays a small role.

Indeed, you'd be forgiven for not spotting it at all. Instead, what stands out it EA's new One Touch mode.

One Touch does exactly what it sounds like, swapping a control method that doesn't always work well on touchscreens for a simplified approach.

Essentially, when the shapes drop into play from the top, Tetris gives you four suitable options as to where they can be placed.

As in all forms of the game, the idea is to form solid horizontal lines of squares to be cleared from the board. One Touch places a silhouette of the shape in question in each of the four positions available, giving you just a few seconds to make your choice with a tap.

While there are times when the four slots open to you don't cover every position in which your shape could fit, in the majority of cases all options are covered, and One Touch leads to the kind of hectic contests that have always been Tetris's signature.

Game of the galaxy

It's a control method EA has also employed in Galaxy – effectively the game's challenge mode.

Here the placement options are the same, but the aim is to drop the shapes into a predetermined structure. As such, things are far more black and white: it's possible to pick the 'wrong' option, breaking the game's intended flow and building up the shapes rather than breaking them down.

Brevity is the main aim, with Tetris rating your efficiency out of five at the end of each stage. The fewer moves you make, the higher you score and the more Touch Coins you pick up – currency that, whether earned through play or paid for, enables you to unlock additional content.

This content currently appears to be missing, however, and like the aforementioned T-Club – which also claims to give access to exclusive bonuses – its presence makes very little difference to the bulk of play.

Something old, something new...

Indeed, T-Club's only noticeable bonus for many will be that it enables you to rank up more quickly – a perk that will only really appeal to those desperate enough to top Tetris's global league tables.

For the rest of us, what EA's refreshed Tetris represents is just that – a solid but slight refinement of the game that will make it more digestible to newcomers and offer even old skool players a fresh take on a favourite.

For those just looking for a slice of Tetris as it was, EA has also wrapped up the standard Marathon mode, bereft of any new control method or revised take on the rules.

Don't be fooled by the new weapons in Tetris's arsenal: it's the same old game, with some touchscreen-friendly tweaks. 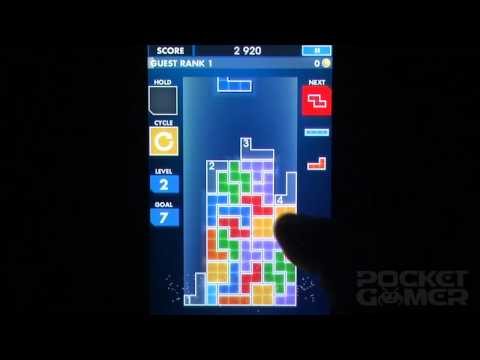 Though it comes with a new subscription service, in truth Tetris is as addictive now as it ever was, and EA's latest manages to fuse old with new in what proves to be a welcome update
Next Up :
Crux: The Great Outdoors review - "Looks can be deceiving'"