Space is great for games - mainly because nobody seems to mind if you blow it up too much. And, boy, does Syder Arcade HD like to blow space up.

It's inspired by the classic side-scrolling shooters of the 16-bit era, delivering a refreshingly pure take on the genre, with only a few minor tweaks to the dependable formula.

Once you've selected your ship, it's off into space for some serious blasting action. Enemies pour into the screen in mind-boggling numbers as you sail across the stars - and it's your job to fend off their attacks for long enough to reach the frenzied boss encounters at the end of each stage.

Firing on all cylinders

Alongside your basic auto-fire - supplemented by a range of fairly traditional power-ups adding the likes of plasma shots and increased blasting speed to your arsenal - you've a special weapon meter that steadily climbs as you stack up combo points.

Once it's full, you're free to deploy a devastating laser strike - invaluable when you're surrounded and the outlook is bleak.

All that makes for a solid shooter core that's perfect for tackling the game's carefully orchestrated waves of carnage. However, Syder Arcade HD has one other nifty trick up its sleeve that makes a huge difference to the flow of the action. Namely, you're free to switch direction, moving forward or back at any time.

It's a setup that enemies are more than happy to exploit, pouring in from all directions. It gives the action a notably different flavour from other old skool shooters, forcing constant surveillance of your surroundings and ramping up the intensity as you dodge 360-degree strikes and dance around the screen.

Syder Arcade HD delivers its furious gunplay with notable finesse, too. It looks great, with a wide range of varied environments and sharp 3D models, while the game's engine is more than up to the task of throwing around eye-searing numbers of enemies and bullets, with ne'er a framerate dip in sight.

It's also been carefully tailored for touchscreen controls - a sensitive virtual stick offers a vital degree of nimbleness to your movements, while firing and weapons upgrades are all handled automatically.

Two additional buttons allow for easy access to your special weapon and direction of movement, meaning you're free to focus entirely on the game's tense, blistering action.

Admittedly, beyond its simple combo system Syder Arcade HD lacks depth - but that's the genre for you. To counter that complaint, developer Studio Evil has expanded the action with numerous difficulty settings, an endless Survival mode, and Game Center support - so there's still plenty to get stuck into. 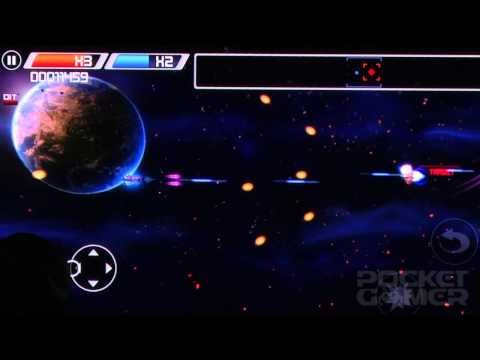 A focused, thoroughly enjoyable - if somewhat shallow - take on the classic side-scrolling shooter
Next Up :
Alien: Isolation review - "Chestbursting fun in the palm of your hand"