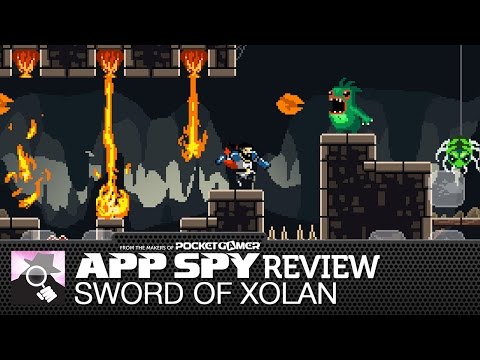 There's something genuinely welcoming about Sword of Xolan.

Its thick pixels and precise controls make it a joy to pick up and play, and while it's challenging, it's not as fierce as some games in the retro hack-and-slash genre.

Everything bounces along quite nicely, and while there are a few too many repeated quips, you'll still find yourself warming to this brightly coloured, violent platformer.

The game sees you leading a knight through a series of short levels. Buttons let you move left and right, jump, slash your sword, and blast out fireballs.

There are dangling spiders, lumbering zombies, and acid-spitting slug beasts to cut down to size. The combat is fast and focused, and while there's nothing surprising or original here, it's all presented with a brilliant spark.

On top of that there's a card-collecting sub game. Every 1500 coins you earn you can buy another random card. These give you extra boosts and buffs that make it easier to tackle the challenges the game throws at you.

Alongside the adventure mode there's a set of time-attack levels. Here you have to smash a set number of targets as quickly as you can. They're fast and frantic, and add an extra dimension to the game.

The weakest links here are the boss fights. They're solid, but they don't show off the imagination of the rest of the game. You follow some patterns, whomp the big buggers, then collect a bit more cash than usual.

But it's a small blemish in an otherwise impressive arsenal. There's real heart here, and the controls are on a par with the likes of Ravenous Games's best creations.

If you're looking for a fun, exciting adventure that's sliced into manageable mobile chunks, then you could do a lot worse than checking Sword of Xolan out.

Sword of Xolan comes to iOS on the 21st of May, we've gone hands-on with it