There's a lot to like about Swipe Casters. It's a clever action game you can play with a single thumb, and it's got enough bite to suck you in and hold on to you for a good while.

Yes, there are some niggles, and a better progression system would have made it essential, but there's still an awful lot of fun to be had here.

The game is all about wizards. Swipey wizards. You're fighting one-on-one with a series of hideous monsters, casting the spells that pop up on cards near the top of the screen.

There's a grid of nodes at the bottom of the screen, and you need to trace the symbol that appears on the cards before a timer runs out. Do that and you'll whomp your foe for a chunk of damage.

But if you mess up and fail to draw out the correct line, you'll take a hit yourself. And that'll be game over for you. You can spend some coins or watch a video to continue, or jump back to the beginning of the game. 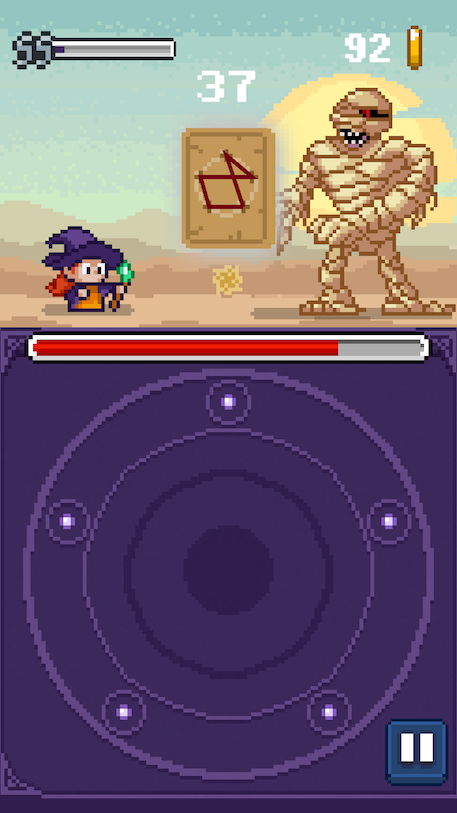 Each stage has a boss fight, and here you'll sometimes have to defend against an attack by mashing the screen. You also get a special soul mode that builds up as you land blows. Here you just need to connect two dots.

After each boss fight your grid gets an extra node, meaning the spells you're throwing down get more complex. You can spend gold or watch a video to get a boost though. This lets you extend the time you get, increase your gold collection, or gives you a longer soul attack.

And everything is a decent chunk of simple entertainment. The drawing is slick, and the nodes make it easier to get things right than just scribbling down patterns.

Drawing of the three

There are problems here though. You don't get coins fast enough, so your progression is a little stilted. You can pay for more coins, but being able to watch videos would ease the process somewhat.

It doesn't detract too much from the fun, it's just a shame that it gets in the way at all, because the heart of Swipe Casters is pretty damn impressive.

Pick it up, give it a go, and then spend the rest of your time thinking about how good it could have been with just a few tweaks here and there.

There's a really great game here, but it misses out on a better score thanks to some slightly poor decisions
Next Up :
Sands of Salzaar review - "An insanely deep open-ended experience (mobile nuances and bugs aside)"