The clone wars has begun (Updated with comment from Dong Nguyen)

iOS + Android
| Swing Copters
Updated on August 27th at 12:20: Dong Nguyen has got in touch to have his say about the accusations. I've pasted his statement below.

"Swing Copters project is exist since February 2014. It names Kitty Jetpack at that time. You can see the screenshot of it on Rolling Stone magazine published in March 2014."

"I am sure this is a coincidence of two games use the same mechanism. But looking in game design aspect, these two games are different games."

The online version of the Rolling Stone article is here. It doesn't include the images from the print version, but there's a reference at the bottom to "a vertical flying game called Kitty Jetpack".

Another Dong Nguyen game, another cloning controversy. But this time it's the Flappy Bird creator being accused of plagiarism by the developers of Bog Racer.

Pocket Gamer has received an email from Open Name, claiming that Nguyen heavily borrowed ideas from its one-touch driving game, which hit the App Store at the end of July.

That doesn't seem like much time to "copy" a game, but considering Swing Copters clones were popping up on the Google Play Store before the game was even out, it's not the biggest of leaps to make.

I've played both of the games, and while there's no real thematic or visual link between the two, the controls are pretty similar.

In both of them you tap to move one way, then tap to swerve back in the other. Both also have pretty awful collision detection, but I don't know if that's part of the charm or just poor game-making. 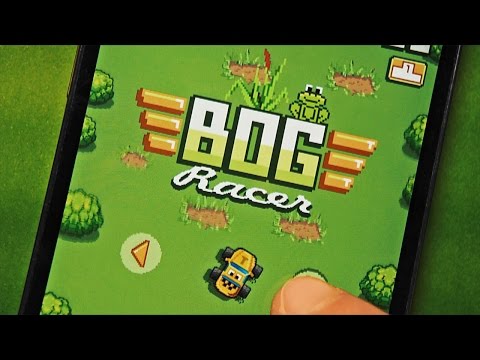 According to Phandroid, Bog Racer could have been pulled from the Google Play Store in the cull of Swing Copters clones as well, which I think is called pouring salt in the wound.

Open Name finished its email with a suggestion that it's going to take things as far as it can in chasing Nguyen.

"We will use all of our modest means to restore justice, and we intend to apply a request that Swing Copters be removed from the app stores. We are well aware that our chances are very slim, which is why we ask for the support of everyone who is partial to our cause."

So there you go. Being impartial bastions of journalistic integrity, we can't take either side. But you can. So go mad in the comments if you fancy it.