It's my second attempt at eye surgery, and things aren't going well. Better than the first try, true, but still - there's been way too much blood loss, and poor Bob's heart rate has shot up well into three figures.

But it's the physical scalpel that's giving me trouble right now. More specifically, it's sticking out of Bob's right eyeball. Butter fingers!

Welcome to the darkly comic world of Surgeon Simulator. 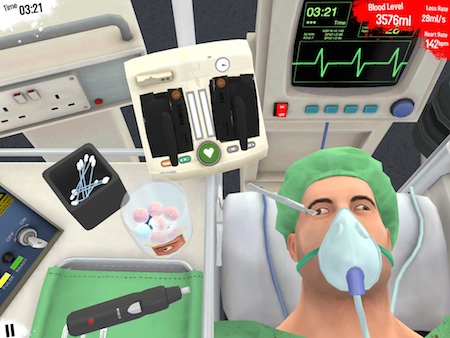 The original PC version of Surgeon Simulator had you manoeuvring your klutzy surgeon's visible arm, with individual keyboard keys corresponding to fingers and the mouse doing the fiddly stuff.

In fact, it was all fiddly stuff. That's kind of the whole point.

But in this iOS version, the arm is out of the picture, and you physically manipulate each object, instrument, and organ with your finger. You can bring a second finger into play to lock on to a rib or piece of connective tissue, which aligns the instrument in your hand accordingly for slicing and bashing.

It's still a deliberately imprecise game, though, with much of the humour coming from the carnage you inevitably wreak, as well as the entertainingly knock-about physics engine that sees bottles, alarm clocks, and more getting thrown around the operating table. 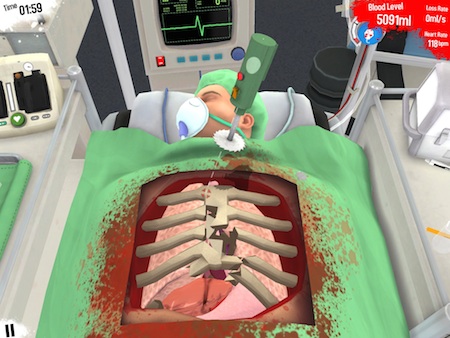 Everything can be interacted with, including that defibrillator

Even the name is a joke. This is no simulator, which you'll swiftly realise the moment you start the tutorial - a quick game of Operation.

Sure enough, each operation you tackle is a simple process with just a handful of crude steps. Heart surgery requires you to bash or cut the ribcage to bits, like hammering through a partition wall.

Organs can be scattered left and right with a rubbery, elastic twang as you dig towards your meaty target - which can then be casually discarded on the floor and replaced with a spare like you were changing a tire on your car.

Actually, with a tire you have to fasten it to your car. Here you just need to plonk the organ into the cavity and Bob's your uncle.

Actually, he's your patient. And boy, is he going to be sore in the morning. 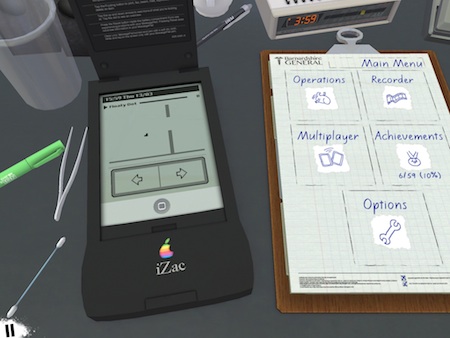 Your iZac gives you instructions, and you can also play 'Floaty Dot' and other games on it

Surgeon Simulator never quite leaves this novelty status behind. It's amusing, yes. Occasionally, it's even hilarious. It's also one of those games that people will love (or hate) to watch over your shoulder.

But it's also essentially a glorified selection of mini-games, with controls that might be deliberately clunky, but they're still clunky nonetheless.

What's more, the change in control system from the original makes sense, but it still lacks the quirky appeal of manipulating an arm like some kind of sick robotic grabber game. Meanwhile, its limited two-fingered approach and rudimentary lock-on system means that deft mastery is unlikely to ever come.

Like its protagonist, Surgeon Simulator is bluntly, carelessly effective and really quite amusing. But do I feel inclined to put a significant portion of my gaming time in its blood-stained hands? Not on your life.

Surgeon Simulator is hilarious, fresh, and oddly satisfying, but it's just a little too slapdash and shallow for its own good
Next Up :
Hero Emblems II review - "Lovely visuals and music, but match-3 combat lacks strategic depth"

Surgeon Simulator smashes its way onto Switch this Autumn

Surgeon Simulator wants you to carve into it, out on Android now