It's fair to say that Super Phantom Cat 2 trades heavily on the Mario games. There are blocks to boop with your head, monsters to stomp on, and coins and stars to collect.

But eventually it spreads its wings a little, adding some reasonably interesting twists to the formula that should keep your attention.

It's not the most difficult platformer, and it's certainly not the most original, but there's a soft entertainment here that's hard to fault.

As you might be able to tell from the name of the game, you're playing a cat. Your friend gets kidnapped by a flying saucer, and it's up to you to get her back.

To begin with you've got some pretty standard platforming. Move around, jump over things, collect all of the shiny things that you see.

A few levels in though, things get a little more exciting. You start to unlock special powers. You can port between places, make vines grow from the ground, and more. 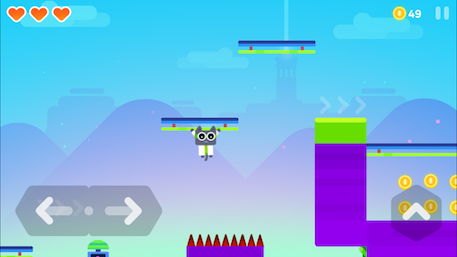 It's here that the design of the levels starts to kick in a little more. They're still standard-ish examples of leaping, but there's a bit more meat on them.

Each level has a number of extra challenges for you to complete as well, and that means you're going to have to explore to find all of the secrets.

Everything is well put together, and the simple controls are slick enough. There are boss fights, levels that mix things up a bit, and plenty more besides.

There is an energy system here though, and some other free to play trappings that might put more seasoned players off. It's not the end of the world though.

Super Phantom Cat 2 is a solid mobile platformer. It's not going to blow your socks off, but if you can get along with its gentle pace and payment structure then you'll more than likely smile all the way through it.

Super Phantom Cat 2 is an interesting, if simple platformer, with a few decent ideas thrown into the mix
Next Up :
Sumire review - "Why do some days stay in our thoughts forever?"