Never mind whether androids dream of electric sleep. I want to know how robots negotiate the subway.

Do they question the point of it all as they cram into a metal tube for the seventh time that week? Do they lose track of which station they need to get off at? Do they annoy their fellow passengers by listening to obnoxiously loud music on their headphones?

Philip K. Dick might have missed a trick here, but Mike Bithell of Thomas Was Alone fame hasn't.

Subsurface Circular places you in the role of a Tek - a sentient robot given one of the boring jobs humans no longer wish to carry out.

Your Tek might look like an extra from The Phantom Menace, but as a detective working the titular transport loop you've been granted a level of intelligence and sass that borders on human. 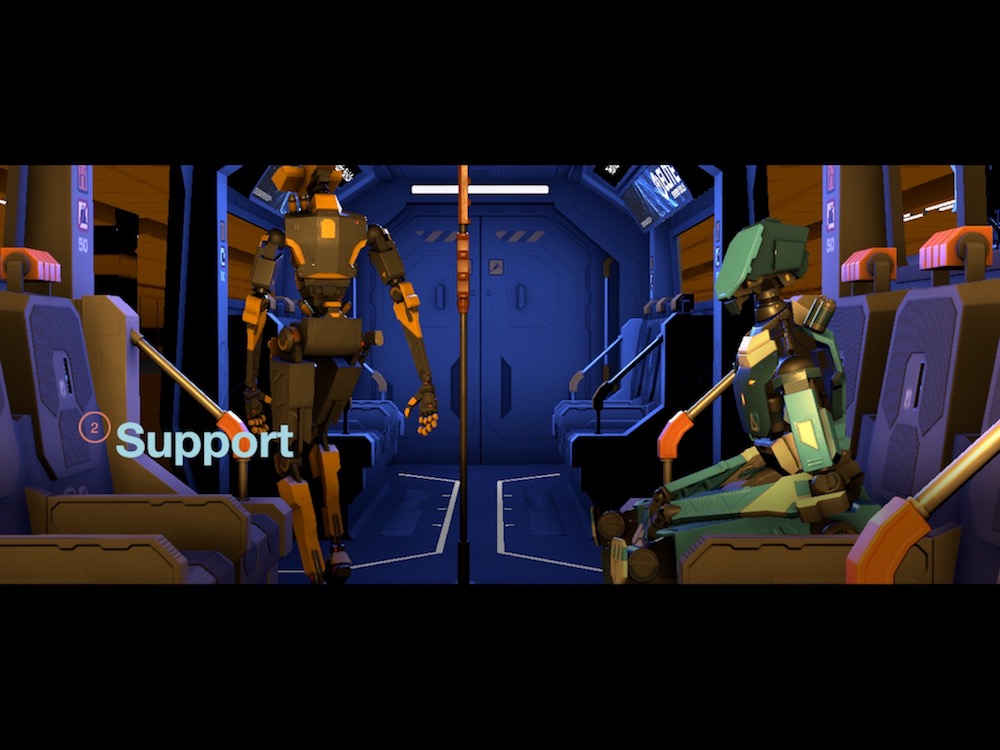 This is the cue for a short, snappy narrative game that sees you questioning your fellow Tek passengers in order to get to the bottom of a disturbing new case.

It would be a crime to spoil any of the details of this story, suffice to say that the telling of it is everything in Subsurface Circular.

There's just a single location in the whole game, and while the cast constantly changes as new Teks join and disembark, the scene is always the same: robots sat looking at each other.

This is pretty brave stuff when you think about it.

The effect of such a constrained setting is largely positive. It serves to focus the story and the player's attention alike.

It's often easy to lose the thread of a narrative in this type of game when you've got multiple conversation choices and potential dead ends, but Subsurface Circular's story is honed to a fine point.

While your Tek's tale plays out in fairly linear fashion, you are required to move the action on through your actions.

You might need to alternate your questioning of a pair of Teks in order to draw out a piece of information from one that will unblock your progress with the other. Mostly you'll need to discover hot topics and fire these at subsequent passengers. 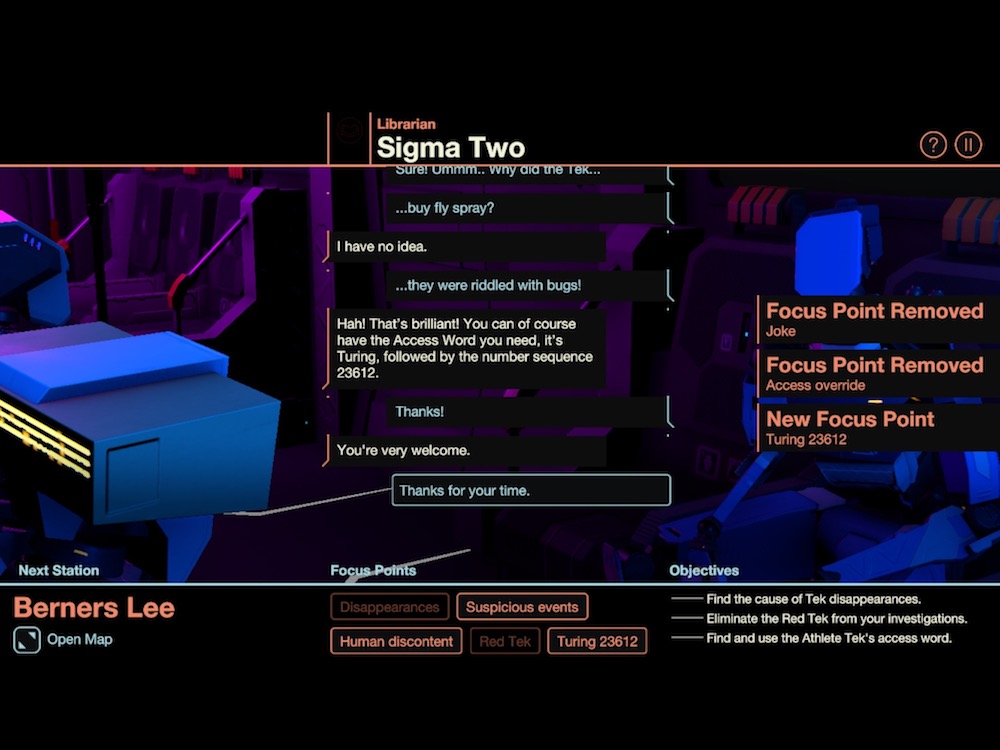 The key to the interrogation system is Focus Points. These are key subject paths that only reveal themselves when you tease the appropriate nugget of information out of the right Tek.

There aren't many puzzles in Subsurface Circular, but the few that are here are pretty taxing. So much so that the game has an in-built assistant to partially reveal the logical hinge point to you should you simply wish to continue with the story.

A journey that flies by

Subsurface Circular works hard to create a sense of urgency despite its pedestrian setting. But it's not a game you'll want to rush through.

I'd hate to be mistaken for that guy who gets hung up on game length, but you should know that Subsurface Circular is not a big game. At all.

I played through at a fairly leisurely pace, exploring all of the narrative options and at least attempting to tackle the logic puzzles head-on, yet my playtime came in just under two hours. 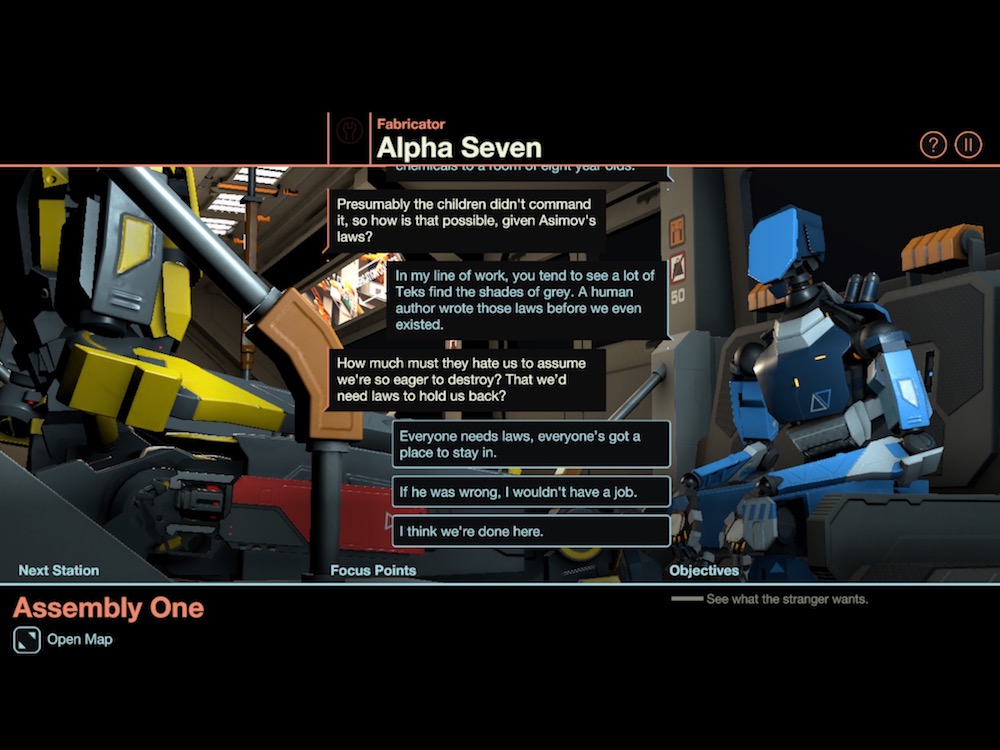 On PC such a brief playtime, coupled with the game's low price, is almost beyond question. It's a short story you read between meatier novels, a delightfully to-the-point indie diversion.

But in a mobile environment, I can imagine a lot of people feeling short-changed at paying £5/$5 up front for such a brief experience.

If you're more concerned with the impact of a story than its length, though, then go right ahead and grab Subsurface Circular. It's a well-told, thought-provoking, frequently amusing narrative game with an offbeat tone all of its own.

Subsurface Circular is a brief journey, but the tale this narrative game tells is both entertaining and thoughtful
Next Up :
Netflix Oxenfree review - "Reading the signals of a thriller story"

Subsurface Circular Switch review - Subsurface? Maybe. Sub-par? Not at all

Subsurface Circular is making its way to Nintendo Switch