I started playing Stranger Things 3 before I started watching the new season, and that was a mistake. It's probably pretty obvious to most people, but games based on TV shows (wait, what do you call a TV show that isn't broadcast on TV networks?) are usually made for the fans of that show. Shocker.

Stranger Things 3 is no different in that regard, but it also gave me a unique perspective. While playing the game I kept asking myself; "Is this how the show goes? Is killing rats a thing thrown in to make the game more engaging, or is the show primarily about killing rats?"

You'll be happy to know that I have now watched the latest season, and to my surprise, killing rats is included, but it downplayed significantly. Probably for the best.

When I went in blind, I was hoping to get a completely different perspective on the Stranger Things story. I wanted to see what it was like to experience that sci-fi tale in a video game environment, being an active player in the world instead of passively watching it all play out. Well, there's not much reason to bother. 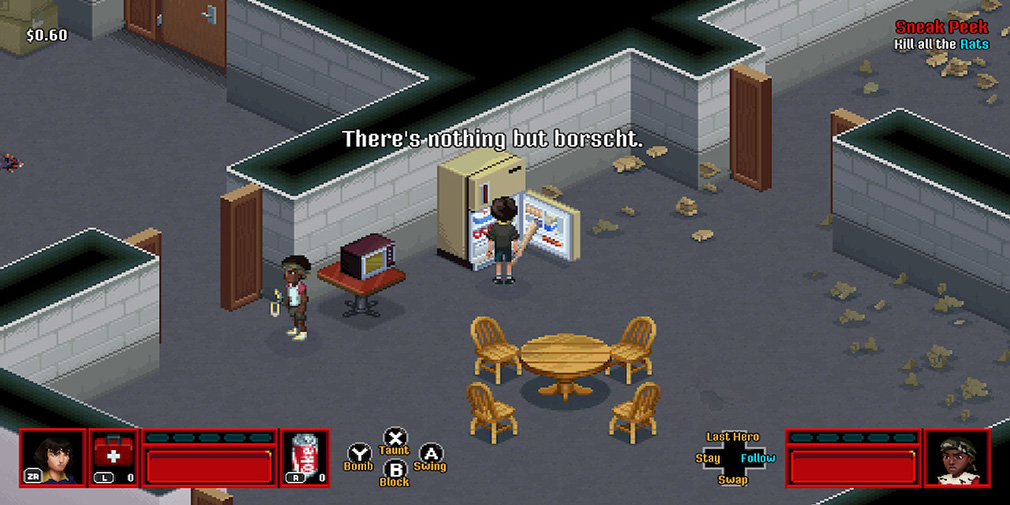 The game is incredibly faithful to the TV show, even mimicking the pacing of episodes, but it's all functional. Fine. Acceptable. Never actually ascending towards being truly great.

I don't want to be too harsh to a TV show tie-in game, especially since Stranger Things 3 is well made, decently polished, offers a good variety of gameplay elements, and it's nice to see the familiar locations from the show in a unique pixel art style. But it's also incoherent.

This is my fault. I played the game before watching the show, and all I discovered is that without the show, it makes no sense. Sure, I recognised the characters, understood the situations, but it all feels so disjointed.

The problem is the structure of the show. They insist on following individual characters and giving them separate storylines that culminate and combine in the final few episodes.

That means you have half of the kids focusing on one activity, Steve and Dustin doing another, Nancy and the geek guy (I'm not Googling the names of forgettable characters, I refuse) investigating rats, Hopper and Mrs. Byers spiralling off into another paranoid obsession… In the show these stories play out individually, but in the game, simultaneously.

You have a single party, all characters are playable once they join it, all characters have their own play styles, and you just ferry them from location to location, attempting to indulge in the story, but never really having a clear indication of what's happening, what it is amounting to, how it factors in to the story at large.

It gets even worse when you attempt to look at the character arcs of the side characters. Season 2's bully Billy ends up being a semi-influential character this season, but his story is told with cutaways in between chapters, and you will simply have no idea what is going on. 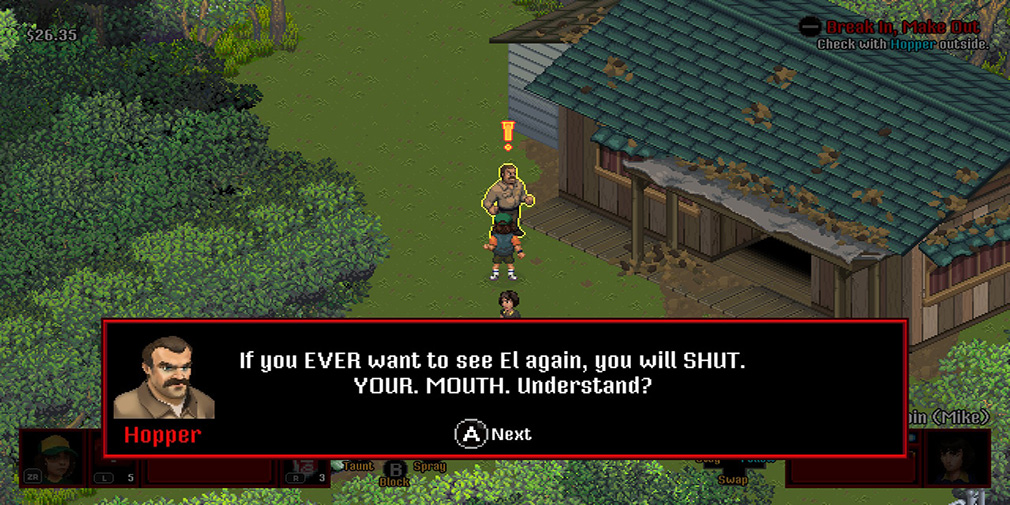 It plays out as a 2D isometric brawler, with your cast of characters stomping through areas, killing rats and Russians, collecting items for puzzles, and upgrading your abilities with crafting materials. Ah yes, every game needs a crafting system now.

It plays out fine. Honestly, just fine. Each area has secret locations which can be unlocked once you have a wider cast of characters, plenty of hidden items and collectibles to find, and a whole bunch of side quests, pretty much all of them being of the fetch variety. It's functional fun, especially in local co-op.

But it gets tiring fast. The combat isn't engaging enough to last hours, and you will be basically bashing away at boring enemies over and over. You can't really go anywhere in a dungeon, or even a basement, or a back alley, or a library, without being accosted by animals or Russians. Which would be fine if fighting them was fun.

Then the environments are obtuse, with familiar tile sets pasted over and over, with zero landmarks to help you navigate stages. The game even just forgets to add quest markers to guide you in certain sections and areas. I had to regularly check the map to find locations and exits, again, just because everything looks the damn same.

And as mentioned, many of the quests are fetch quests. Go here, talk to a character, go to three separate locations to investigate items while beating up animals and Russians, go back to the character, repeat ad infinitum.

My initial impression of Stranger Things 3 was frankly far more optimistic than my final impression. I don't hate this game, absolutely not, but I am less than impressed. It just doesn't hold up to extended play sessions. The concept and execution seems fine, but begins to drag so quickly.

I feel like I've been unfairly negative to the game at this point, because honestly, I think it's pretty good. I think it's better than many people were expecting. But after watching through the season and playing through the game, I have had enough of Stranger Things.

This is made for fans of the show, and if you think the show is great, you'll like this too. Just don't expect anything too incredible, grab a friend for co-op, and you'll have a good time
Next Up :
Netflix Desta: The Memories Between review - "Pass the ball and conquer your dreams"