In the wake of Monument Valley we've seen a lot of dream-like, ethereal puzzlers on the App Store. Some of them have been great, some of them have stuck a little too closely to the game that inspired them.

Thankfully Starman fits into the first category. While Monument Valley might be the game it's compared to the most, it finds its own niche and heads off in directions that you might not imagine.

The game sees you controlling a space man through a series of levels. The ultimate aim is to collect little lights. You give these to a small creature in a forest, who turns them into butterflies. There's more to the story than that, but you're better discovering it for yourself.

The levels are essentially puzzles. There are switches to push, levels to pull, and handles to turn. Everything is pretty well designed, and figuring out what you need to do involves some plesant trial and error.

Everything is presented in gorgeous black and white. Well, almost everything. Again, I'll let you find that out for yourself though. The game has a unique look and, perhaps more importantly, it has a unique feel. 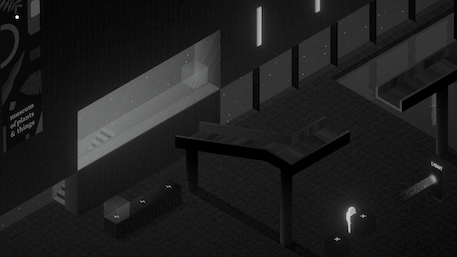 There are a few problems though. Sometimes the puzzles require a lot of back and forth, and your little spaceman doesn't move very fast. And if you miss something it can get a bit dull tracking back to sort it out.

But overall there's such a dizzying shine here that it's hard to get upset. Everything moves along with a strange tempo that the game makes its own. It's as methodical as it is meditative.

At its best Starman reaches the heights of its inspiration, and even at its worse it's better than most other games in the genre.

Take your time with it, have a sit down and make a brew. By the end you'll have played through something that's really rather impressive.

A brilliant adventure you should definitely check out
Next Up :
Pawnbarian review - "A minimalist roguelike that's hard to put down'"