When tactical role-playing games are designed well, they can be hugely engaging.

Some folks grumble that they're devoid of personality or character, their gameplay boiled down to a tedious drudge of turn-based combat. But that's the beauty of it. These are RPGs in their purest form, with all the florid storytelling and stale archetypes stripped away. No distractions.

And then along comes a game like Squids, whose purpose in life, it seems, is to imbue the tactical RPG with a wee bit of charm.

The title will give you some indication as to the theme. A malign, inky, dark influence has corrupted the fishy occupants of an undersea kingdom. It's up to a gang of eight-armed freedom fighters to liberate them from slavery, and to save our seas in the process.

Each level revolves around a basic objective: defeat the baddies, survive for a set number of rounds, and capture some treasure.

These are joined by a series of secondary objectives, like finding a hidden object, all of your party surviving intact, or completing the level in as few moves as possible.

Each octopus has a gauge of bubbles that it uses to fuel its movement. Using the touchscreen, you stretch the squid and determine the angle and velocity it travels at. This is the fundamental tactical consideration - if you expend bubbles to get within striking distance of an enemy, you have to make sure you have enough left to go on the offensive as well.

Movement is further complicated by the scenery, which features spiky porcupines, anchors, water currents, and steep precipices over the yawning abyss. Also, if you ping your squid through little bottles that are scattered around the scenery, temporary power-ups like health, protection, and offensive starfish come into play.

The octopi are subdivided into classes, such as healer, or scout, or just plain badass. Each has a special move, based on this class, like the healer. She's crap at offensive, but if you bounce her into a cluster of compadres she'll dispense some precious HP to prolong their lives.

More of these characters and classes are encountered throughout the game, and you build up your party based on your preferred style.

Their abilities and special moves can be augmented by levelling them up and using special headgear to improve their stats. Except, and here's the but, both augmentations have to be paid for using the in-game currency, pearls.

Pearls are accumulated in one of two ways. Firstly, you harvest them from within the game by defeating foes and finding treasure. Secondly, you can buy them. This is a potentially divisive move, in that players have the option to circumvent the traditional grind by simply plonking down the plastic and buying the goods outright.

Is this a fair or balanced way to play the game? No, not really. But a humble games developer has to make his crust somehow, and in-game purchases is the prevailing trend in iOS development at the moment.

Eight arms to hold you

The presentation and production values on Squids are splendid. The soundtrack and graphics are crystal clear, and they have more than a passing resemblance to the likes of Finding Nemo.

The storytelling and cut-scenes are pretty cliched, but no worse or more offensive than we've already seen in Final Fantasy.

But it's the gameplay where the game really shines. The controls are pitch perfect, and you'd be hard pressed to imagine a better combination of form and function than touchscreen and turn-based combat.

The only real gripe is the inclusion of in-game purchases for a game that you've already paid for. It's tough to get the balance right between levelling-up the traditional way and paying for the privilege, and the price-points for the pearl-packs seem a little extravagant. 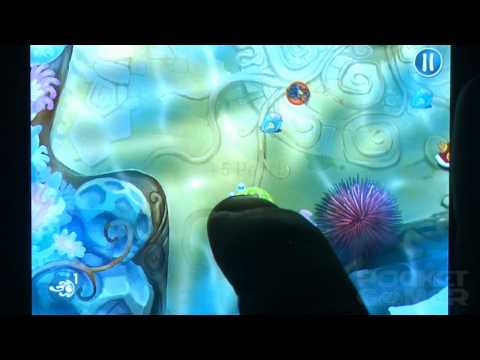 Like a bowl of deep-fried calamari with sliced lemon and mayonaise, every bite is a delight. It's just a shame about the pricing model
Next Up :
Milo and the Magpies review - "A burst of colour and a short but touching story"