Retro-looking 2D platformers are all the rage on the App Store nowadays, and while there are plenty of chip-tuned, pixelated leapers to choose from most of them have enough new ideas that they're not reaching saturation point.

Spellsword plays around with the Super Crate Box template, throwing in collectible cards, RPG-style equipment, and an irreverent sense of humour that pokes fun at popular culture and the game itself.

You play as a nameless hero who's just discovered the titular blade. Pretty soon you're inundated by violent creatures who want to kill you, and you'll need to start jumping around the screen, collecting the spell cards that appear.

These cards augment your Spellsword with different elements, which make your slaying task that much easier. Picking up a card fires also out a burst of energy, which knocks down most things in the vicinity.

There are three different screens to fight on, each of them boxed in, and each with its own set of 20 challenges. These include killing a set number of enemies, surviving for a length of time, or collecting a bunch of the cards before you die.

Hacking, slashing, and moving are controlled with on-screen buttons, and while they're not perfect they're not problematic enough to spoil the game.

You can spend gems you pick up and receive for completing challenges on extra equipment and beefing up the power of the various cards you find. New hats, rings, and amulets are given out after some levels, all of which are essential for the tougher levels.

Some of the challenges on offer are a little too simple, involving nothing more than standing in a corner of the screen and hammering the 'attack' button, but others are fiendish, clever, and an awful lot of fun.

An Endless mode complements the challenges pretty well, and gems you collect in one mode can be spent in the other.

Spellsword makes a few mistakes, but it's enough fun when it gets things right that it's easy to forgive. Its gorgeous graphics, swaggering sense of humour, and occasionally brilliant ideas make it more than worth your attention. 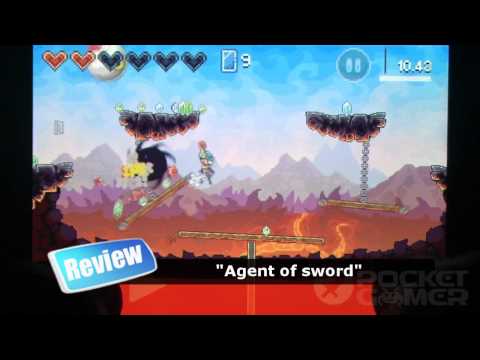 Tough in most of the right places, Spellsword might miss a few tricks, but it's core gameplay is solid enough to keep you playing regardless
Next Up :
Streets of Rage 4 mobile review - "Worth the twenty-seven-year wait"