Genre veterans accustomed to the pace of Street Fighter and the technical demands of Virtua Fighter discovered that Soul Calibur brought something entirely new to the fighting genre on its 1999 console release:

What’s more, the game emphasised accessibility where other fighters catered only to the hardcore. For those who couldn’t manage so much as a hadouken or a sonic-boom, Soul Calibur offered visual spectacle and flowing combos with just a few button-presses.

Someone of your Calibur

But despite the relative accessibility of Soul Calibur, porting an arcade fighting game to a touchscreen device has resulted in some inevitable compromises, and there are moments when the flow of gameplay is interrupted by control inadequacies.

Thankfully, the placement of the on-screen buttons is highly customisable, and problems are an occasional irritation rather than a constant issue.

The absence of any multiplayer mode – the bedrock of any fighting game – is a more serious offence, and Soul Calibur’s lifespan suffers as a consequence.

After all, trouncing your friends has always been excellent motivation for memorising combos, and pounding the AI doesn’t really offer the same thrill.

Survival and Survival Extra modes offer up a little focused challenge to complete once Arcade fatigue sets in, but even with leaderboard support adding a competitive edge to proceedings these make a poor substitute for the tense duels of the original title’s Versus mode.

Arcade mode sticks closely to the genre staples: a series of one-on-one fights of escalating difficulty, ending in a faintly anticlimactic boss battle. Success is rewarded, as the time-honoured fighting game tradition dictates, with a character-specific end sequence and a new fighter to play with.

The cast of characters available is varied and interesting, even if their designs lack the iconic flair of Capcom’s brawlers or the big-name clout of the Marvel-branded outings.

Their moves are what count, though, and Soul Calibur’s armed characters feel gratifyingly powerful – from the hyper-kineticism of Maxi’s nunchaku to the slow heft of Siegfried’s claymore.

Visually, Namco Bandai’s spit and polish job has worked wonders on an already handsome game, and fights look crisp and vivid on Retina display screens. Meanwhile, those acquainted with the busty excesses of later series entries may be surprised by the slightly more dignified design choices of the first game.

Even Ivy possesses roughly human proportions, and Taki’s nipples – as much a series staple as swordplay and ring-outs – are yet to take centre-stage.

But the soul still burns…

There’s no question that Soul Calibur holds up as an excellent game. Combos are intuitive enough for newcomers to learn in the natural course of their button-bashing, while the fighting system possesses enough depth for pros to take a more considered approach.

But the lack of multiplayer chafes, as does the absence of the Dreamcast version’s substantial Mission mode.

Namco Bandai has recently made the bold pronouncement that "free-to-play games can't be high quality", but whatever your opinions on iOS pricing, it’s hard to justify a £8/$12 price tag for a truncated port of a 13-year-old title. 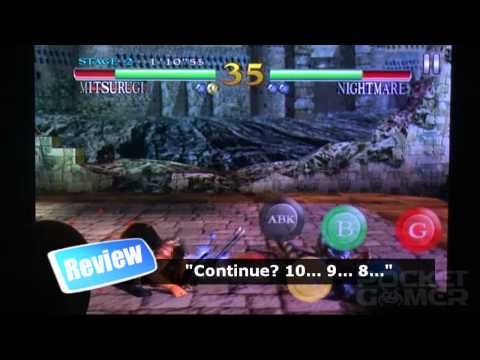 Soul Calibur is a fantastic fighting game, which is harder to recommend than it should be thanks to a high price tag and the omission of any multiplayer modes
Next Up :
Sumire review - "Why do some days stay in our thoughts forever?"