Anyone who grew up playing videogames in the 1990s probably has a similar reaction when ice levels are mentioned - a shudder, followed by a soft, under-the-breath curse, then a single tear will roll down their cheek and they'll have to go and have a sit down for a bit. Which is why I approached Snow Kids with some trepidation.

Thankfully though, it wasn't warranted. This is a charmingly old-school platformer that rarely frustrates. It offers up an interesting combination of familiar ideas, riffing on the likes of Mario, Kirby, and more.

Obviously those are pretty big boots to even think about trying to fill, but Snow Kids just about manages it. It's up there with some of the best arcade platformers for mobile, and it won't cost you anything to give it a go.

After a brief bit of story, involving getting a snowball chucked in your face, you head out into the world to right that particular chilly wrong. Cue a whole heap of platforming action for you to push your face into. There are spikes to leap over, moving platforms to conquer, and more.

So far, so standard. But the game features an interesting snowball mechanic that keeps things fresh. If you touch an enemy when they're not frozen you're going to take some damage. Chuck one of your snowballs and they become frigid for a couple of seconds, giving you a chance to attack.

More than that though, you can use frozen enemies to deal with slightly warmer ones. Barge into a frozen foe and they'll shoot out in the direction you're heading, killing any other creatures that they touch along the way. 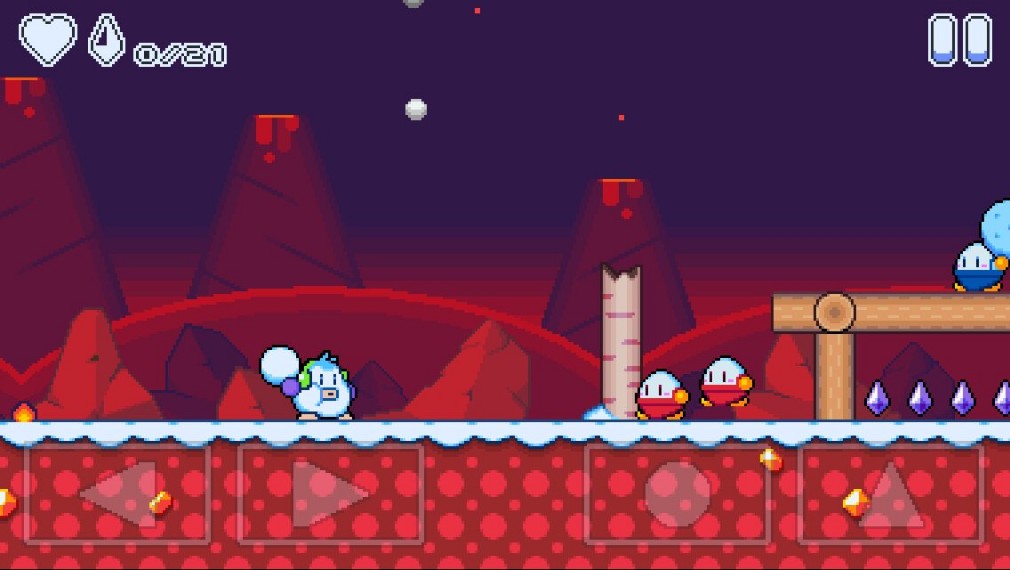 As well as keeping things interesting, the snowballs join everything in the game together. There's a slightly different flow thanks to them that keeps the game from falling into the traps of other retro-looking platformers we've played in recent months.

That's not to say that there aren't points here where you're going to feel like you're treading on old ground, but they're few and far between and there's a real spark to some of the sections here that's going to get your fingers and your brain really working.

Even the boss fights are pretty solid, offering tough challenges where you need to learn patterns that are different from those you're using in the main levels. This isn't an easy game either, and some sections of the game you're going to feel proud about finishing off.

Snow Kids isn't a game that dwells too much on the games that inspired it. It takes a retro-platforming template and then shakes it up enough to make sure that modern players aren't going to be put off by it.

Where other games try too hard to be something they're not, Snow Kids feels like it's comfortable in its own skin. It doesn't try to be anything that it's not, and in doing so creates an awesome and, most importantly, enjoyable experience.

Snow Kids knows what it is, and what it is is an awful lot of fun
Next Up :
Hero Emblems II review - "Lovely visuals and music, but match-3 combat lacks strategic depth"