When you first play Snake Pass, you'll probably wonder why this hasn't been done already. In a world of established genres where iteration is the best we can hope for, here comes a puzzle platformer that doesn't play by the rules.

It also feels lovingly retro. If I knew nothing about Snake Pass, and someone told me it was a remastered PS1 or N64 game, I wouldn't have doubted them. That's not to say it's ugly, but the minimalist mechanics, music, and colourful visuals make it feel like a product of yesteryear.

But the most important question is - should you buy it? The Nintendo Switch is crying out for more games right now, and here comes Snake Pass with its Nintendo-like platforming charm. No-brainer? Let's find out.

Snake Pass challenges you to complete a series of obstacle course-like levels as a snake. You can slither, wrap yourself around stuff, and swim underwater.

And you do feel like a snake - largely thanks to the realistic physics engine. You're only ever directing the head, with the body trailing along behind you, and there's a real sense of weight to proceedings.

Snakes make it look easy, but moving a body which is, essentially, a length of rope is tough. You can't just drag it across the floor because it's too heavy, so you have to move in an s shape to build up a good pace.

Climbing is similar. Snakes don't have arms so you have to wrap your body around objects to give yourself the support to slither up. It's tough at first, but you soon get into the natural rhythm of using your snake body like a natural grappling hook.

That's when you start to see the real charm behind Snake Pass. The puzzles themselves aren't particularly difficult - Lara Croft or Nathan Drake would complete each level in a matter of seconds.

But that's not the point. Here, you're a snake, and the challenge comes from your own body. It has its benefits, but ultimately it's a bit of a struggle.

That's not to say that the puzzles are terrible - they just mostly boil down to navigating the environment. Climb some bamboo poles, navigate the edge of a precarious drop, or swim through water.

But don't get too hung up on that. You're mastering exactly how to be an animal that is absolutely nothing like a human, and no game has really done that before. When it works, it's pretty remarkable stuff.

You do get the feeling that Snake Pass needs a little more time in the oven though. Technical issues mar the experience slightly. HD rumble might decide to go insane for no apparent reason, and I suspect that it's being upscaled from a fairly low resolution on the Switch. 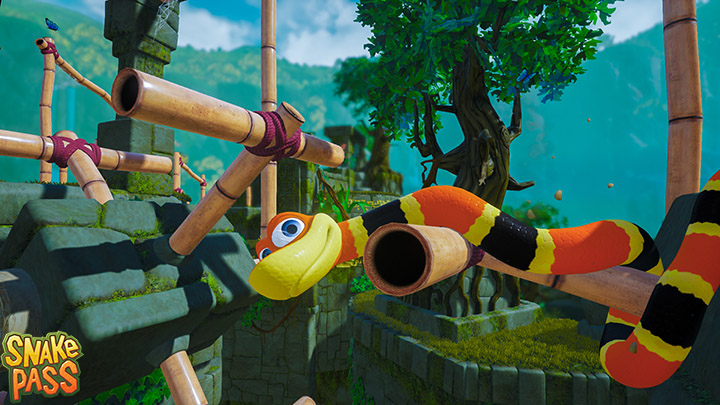 That results in blurry imagery - a problem compounded by the fact it's not running at a smooth 60 FPS. It's stable for sure, and I didn't run into any framerate issues, but you do get a bit of a sense that Snake Pass is struggling on this platform.

There's also some archaic design on display - the most damning of which is the checkpoint system. If you die, you get sent back to the nearest checkpoint that you slithered over. Fine, but you lose all progress that you made since then.

This forces you to return to a checkpoint each time you've grabbed a few of the level's items to save, before moving on. It's good that the level design is such that you're able to do that, but given that death is so easy to come by it's a bit frustrating that it's necessary.

Developers have became way savvier in their approach to punishing death in recent years, with many considering the death to be a punishment in itself. I'd say that's an approach that should have been taken here.

I understand the difficulty the developer's faced here - you could easily game the system by throwing yourself off a cliff edge, grab an item on the way down, and then instantly respawn back alive, completely surpassing the challenge itself. That would suck.

But the compromise also feels a tad imperfect. I didn't appreciate having to backtrack to save, and I doubt you will either. 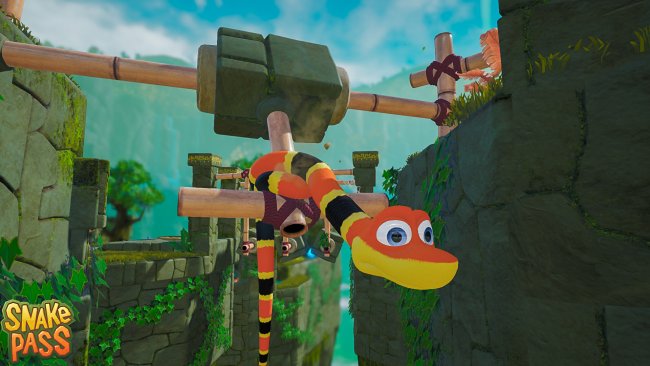 You can't argue that Snake Pass isn't innovative. Sure, it follows many standard physics platforming tropes, but it isn't interested in playing by the rules.

The challenge here is in learning how to be a snake - and mastering its unique body to successfully navigate the environment. It works. You really do start to feel like a snake in your movements, in the weight of the body, and the difficulty in facing seemingly obvious challenges.

When it works, it's remarkable, and offers something a little different to the norm.

Sadly, some slight technical issues do mar the experience. The visuals are too blurry, it's not as smooth as it could be, and the HD rumble issue needs to be ironed out ASAP.

Look past these issues, and you'll discover a unique and charming puzzle platformer that manages to serve as a love letter to 3D adventures of yore.