The marketing guru who came up with the name Smash Cops deserves a pat on the back. In just two words, you immediately understand the appeal and concept of the game. You’re a cop, and you have to smash things.

And if you think the name lacks subtlety, just wait until you play the thing. Occupying a pop cultural nexus between Police Camera Action, Grand Theft Auto, and Starsky & Hutch, the game has you carooming around town in your squad car and apprehending perps by ramming them into submission.

Slow-motion car crashes are a frequent occurence, festooned with a confetti of splintered glass and twisted metal. It’s simple but effective, and any thoughts about responsible driving take a back seat to the arcade thrills and spills.

There are two things about Smash Cops that make it special - two design choices that make it different from most other driving games on the App Store.

The first is the control scheme - you plant a finger behind the car to make it accelerate, and then shift your digit left or right to make it turn a corner.

It’s just like pushing a car around a road mat when you were a toddler, except it takes place in an open-world sandbox. Tapping the screen causes your car to ram into other cars, but only after the meter has charged up and turned from red to blue, so it’s best used sparingly.

If these controls seem too outlandish, you can always switch to a more conventional touchscreen joypad. But propelling the car with your fingers feels more immediate and makes better use of the touchsceen: you can smudge all of the surface, instead of just the corners.

The second design choice is how the action is presented. The idea is that these chases are being filmed from a helicopter by a television news channel and beamed live to an audience.

In-game actions like mission briefings or catching suspects are presented as headlines across the top of the screen, just like you’d see on a news bulletin.

It works brilliantly, providing a coherent and consistent perspective on the action and making best use of the open-world format by seamlessly following your car and panning across the city and its locations.

The graphics look splendid, not least when your car crashes into the scenery and blows it smithereens. All that’s missing is a fruit stand to make it complete.

If there’s a speck on the windshield, it’s that the fun is over far too quickly. There are about four different mission types to play – ranging from capturing criminals to racing to a crime scene – with upgraded cars to unlock and stars to collect. But experienced players will burn through these in an hour or two, and they’ll be left wanting more.

There’s also a niggling feeling that more could have been done with the Smash Cops sandbox - a multiplayer mode, for example, so that two or more players can turn each other's cars into scrap.

Also - and here we may have been spoiled by GTA - the absence of humour feels like a missed opportunity.

The theme tune hints at something great - a vintage guitar rock piece that’ll have you doing a barrel roll over the table and behind the sofa. But there could easily be more, not least with the constant presence of the news chopper and the opportunities for satirical commentary it gives.

But all this is nitpicking. The core game is a blast to play, a veritable smash and grab on the senses, and a solid foundation for things to come. 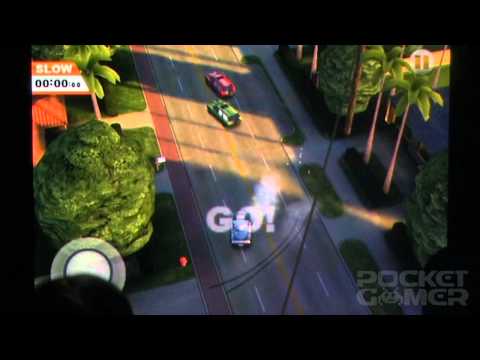 An open-world battle racer with more crash-bang-wallop than a brass band in a bar-room brawl. It just needs a smidgen more dev to realise its full potential
Next Up :
Hundred Days review - "A success for the management genre"