At the risk of reducing Slayin to a soundbite, it's like Super Crate Box meets RPG. At the risk of making things worse by reducing it to another one, it's also a bit like Spellsword, but less platformy.

If you're familiar with those references then you're probably picturing a game with 8-bit era graphics and driving chiptune music. You may also be imagining weapons, gems, combos, treasure, Fame Points, quests, a choice of unlockable characters, plenty of indie spirit, and a modest selection of in-app purchases. Clever old you.

You start off playing as a Knight. Tapping left or right makes you run automatically in that direction, and as you charge back and forth across the screen you plough through the blobs and dragons and tombstones and flaming skulls that pour into the stage from every direction with your sword.

Every so often there's a boss stage, and slightly more often you get the opportunity to visit a shop and spend all the loot you've been accumulating through slaughter on modifying your weapon, replenishing your health, and cladding yourself in armour.

There's also a combo meter, which fills up whenever you kill something and then rapidly depletes, meaning you have to maintain a steady kill rate if you want to score big, forcing you to constantly weigh up the relative merits of caution and courage.

And in the background there are quests to complete, such as hitting the imp twice before taking any damage, and killing 100 enemies with your flare.

Eventually you'll die. The baddies are all wimps, but as you progress through the game they become ever more numerous, and new baddies with tricky movement patterns appear.

It's easy to mince your way through lines of docile blobs, jumping occasionally to extinguish a flaming skull, but once there are projectiles to dodge and swooping things in the air you'll start to sweat, and eventually you'll be overwhelmed.

The weapon upgrades and armour that you can buy help to delay this outcome, but not by as much as you might think. A longer sword, a shot of luck, or a speed boost have a relatively modest effect - though armour is quite useful. Whatever you do to improve your odds, your score generally reflects a fairly even mixture of luck, skill, and judgement.

At the end of each round you learn how many Fame Points you've accumulated, and you can spend these FPs on unlocking the Wizard and Knave characters, as well a 'continue' facility and a couple of extra modes.

The three characters are significantly different from one another. Whereas the Knight has a blade and can jump, the Wizard has no blade and can only turn into a temporarily invincible tornado or kill enemies with fire obtained through upgrades.

The Knave, meanwhile, has two blades, meaning he doesn't have to worry about baddies behind him. He doesn't have the Knight's high level of Defense, but he has plenty of Luck - of which the Knight has the minimum possible amount.

The way you approach Slayin varies slightly depending which of these characters you choose to take into battle, and unlocking them makes the game far more interesting. However, none of them makes it entirely interesting.

Slayin is a solid (inhale now) pixel-art indie casual action-RPG. While the ideas it contains aren't entirely new, and nor is this particular combination, it's still a reasonably unusual and well-made game.

However, it doesn't have the appeal of the best pixel-art indie casual games. Yes, there's grinding, but it's nothing like as compelling as the grinding in, say, Ridiculous Fishing or Jetpack Joyride, because there are far fewer things to unlock.

And yes, there's action, but it's nothing like as fun as the action in, say, Super Crate Box, because you're confined to a single horizontal level and after a while the stages get so crowded that a woolly, gradual failure is inevitable as the largely oblivious baddies dumbly shunt you to death.

There are many creative, interesting, well-made games pixel-art indie casual games on the App Store. Slayin, with its authentic 8-bit graphics, chip-tune music, and stripped back modern gameplay, is one of them - but only just. 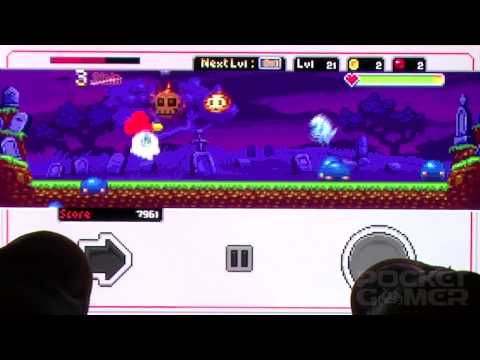 Slayin is a solid casual game that chooses its influences wisely but doesn't entirely do them justice
Next Up :
Hero Emblems II review - "Lovely visuals and music, but match-3 combat lacks strategic depth"