If you sat the average, untrained human in the cockpit of a plane and asked him to fly it the results would be catastrophic.

And probably quite funny. Sky Gamblers: Storm Raiders realises this, and while its planes might be 50 years old it also knows that some people aren't interested in historical complexity.

What we have here is a game that, thanks to a tiered control scheme that allows you to tip the realism/fun balance in your own favoured direction, is as entertaining for grizzled flight sim devotees as it will be for fresh-faced pick-up-and-play deathmatch fans.

The game is set during World War 2, with the single-player Campaign mode focusing on the iconic air battles of that hallowed conflict. You'll battle the Japanese at Pearl Harbour, try and keep the Luftwaffe from destroying London in the Battle of Britain, and generally prove yourself a good egg and all round flight master.

The controls are as complex as you'd like them to be. Simulation lets you pull the levers, tilt your device, and get as close to flying a Spitfire as you're ever likely to. Less realistic schemes let you fly with a floating joystick and make sure your bullets hit home even if you're blasting the air around your quarry.

Alongside the single-player sits a fully featured multiplayer mode. Against famous and infamous backdrops you'll defend bases, battle to the death, and try and outfox your opponents in violent, tightly paced matches.

Sky Gamblers: Storm Raiders is packed to the gills with content. There are planes to unlock, sorties to fly, and if it takes your fancy a complex and nuanced control system to try and master as well. Even casual players will enjoy the frantic, bullet-riddled digital recreations of well-known dogfights.

And on top of it all, the game looks gorgeous. Sun sparkles off your plane as enemy fighters blast by, your cockpit pock-marked by the spray of their bullets.

With missions galore and a deep, absorbing multiplayer mode, Sky Gamblers: Storm Raiders is a wonderful addition to the flight sim genre, and it sets its bar for entry low enough that anyone can clamber into its cockpit and become a hero of the sky. 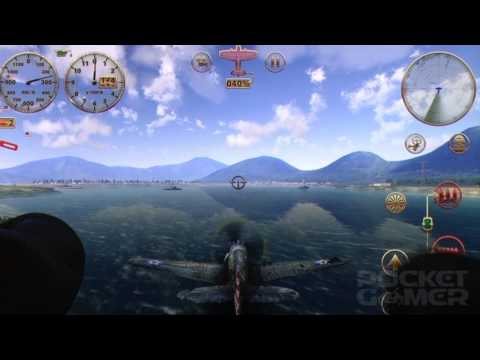 Gorgeous to look at and with a control system to suit every taste, Sky Gamblers: Storm Raiders is a great flight and fight sim
Next Up :
Evony: The King's Return review