While there’s a definite appeal to modern multi-million dollar fighter jets with their advanced technology and sleek lines, the embryonic days of aerial combat possess a unique romance of their own.

World War One fighter pilots were often called the 'knights of the sky', a chivalrous term no doubt inspired by the fact that they were often close enough to exchange words with their foes as they fought to bring their primitive machine guns to bear on their enemies' delicate fuselages.

Sky Gamblers attempts to recreate that glorious – but often fatal – appeal. It’s a 3D air combat simulation that uses both touchscreen and accelerometer control to give a truly impressive replication of what it must have been like to strap yourself into one of these flimsy planes.

The control system is rather complex – something which is made even more apparent by the unnaturally long tutorial mission. As you might expect, tilting your iOS device causes the plane itself to pitch and bank, but your speed is influenced by an on-screen D-pad.

Pushing up and down predictably raises and lowers your speed, but horizontal movements allow you to strafe without having to bank the entire craft. This is indispensable when it comes to making minor adjustments to your aim.

In addition to these basic commands, you can also execute special manoeuvres by swiping up, down, left, and right in the middle of the touchscreen. These gestures allow you to perform loops and quick turns, and these can prove to be life-savers when you’ve got a determined enemy on your tail.

Becoming accustomed to this setup takes longer than you might otherwise expect. Although tilting your phone to steer comes naturally enough, the fact that you’re also using an on-screen D-pad feels odd at first.

Several times we wondered why our plane was hurtling towards land, and then we realised that instinct was telling us to steer with the D-pad and not with the accelerometer.

This learning curve might prove off-putting to begin with, but once you master the intricacies of the control system you discover that there’s actually quite a lot of scope for skilful piloting

By combining tilts with swipe gestures, you can pull off some truly spectacular moves. There’s no feeling quite like turning the tables on your foe and putting their plane dead in your sights thanks to some particularly deft aerial tricks.

There are several single-player missions to unlock in Sky Gamblers, as well as a series of planes. OpenFeint and Game Center support are both included, and these go a long way to sustaining your interest in flying solo.

However, as all seasoned aces will tell you, there’s nothing quite like taking on real people. Sky Gamblers boasts both local and online multiplayer, with up to eight player slots available.

It’s here that you really put your cockpit skills to the test: we were surprised at the high standard of the competition – which is just a nicer way of saying that we repeatedly got our rear-ends handed to us.

You might think that the iPhone is the worst possible platform for a multifaceted and demanding combat flight simulation, but Sky Gamblers proves that viewpoint to be false. Granted, it’s not quite as convoluted as some PC-based examples of the genre, but the sense of mastery you get once you’ve nailed the interface is palpable. 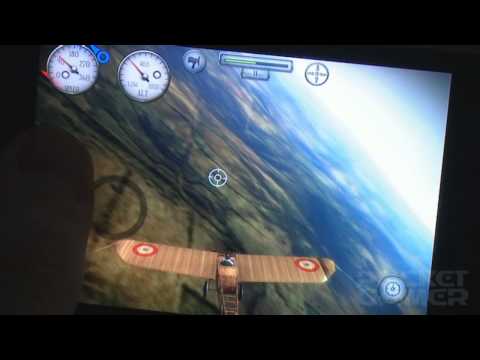 The controls take some getting used to, but the effort is worth it as Sky Gamblers provides hours of excellent dog-fighting fun - both in solo and multiplayer form
Next Up :
Jade Order review - "An puzzling path of the warrior"