Sidewords is an interesting mix of a logic puzzler and a word game. It's tough, and it's definitely got some intriguing ideas, but it's not going to be to everyone's taste.

That said, anyone looking for their next fix of letter-based head scratchers is definitely going to find an awful lot to like here.

Come in with an open mind, and a brain that's ready to figure out some pretty stern challenges, and you're going to find yourself having a pretty lovely time.

Grid and bear it

The game takes place on a series of grids. There are rows of letters along the top and the bottom, and then a number of blank spaces in the middle.

You need to fill the empty spaces with words. You make these words by tapping on the letters around the edge of the grid. But there are a few things to consider.

Using letters fills in spaces where they intersect on the grid. So using the first and second letter along the top and the first down the side will fill in the two top right spaces in the grid. 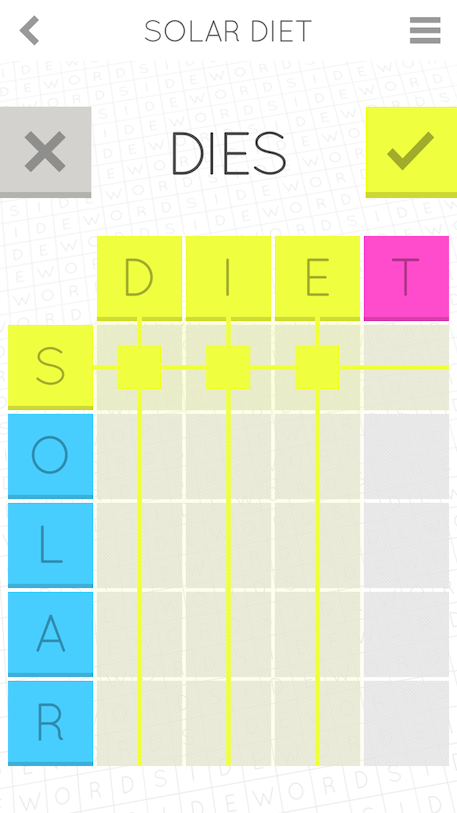 Your words can't cross over though. So while you might find a perfectly good word, if it's going to take up some of the space occupied by a word you've already played, you're not going to be able to use it.

It takes a while to really get to grips with things, since Sidewords isn't quite like anything else you've ever played before. But once you fathom out what you're supposed to be doing, you'll find the experience opening up.

There's plenty to do here as well, with loads of challenges and a couple of different game modes to work your way through.

And, perhaps more importantly, there's a lot of fun here too. It's sort of like a mash up between a crossword and a sudoku, with a bunch of other elements mixed into make an end product that's pretty darn fresh.

For those of you looking for something wordy and smart to spend your time with, you could certainly do a lot worse than checking this one out.

A puzzle game that's a little tough to get to grips with, but is well worth putting the time into
Next Up :
Jade Order review - "An puzzling path of the warrior"

Sidewords is a no-rush word-based logic puzzler, coming to iOS on July 18th