Shootin Star is an endless runner where you'll be hopping up the screen rather than following the usual left to right formula. You play as a fallen star that's looking to return to the sky. How is it going to get there? By using the recoil of a variety of different guns, of course. We handed the game over to our App Army to see how close to the sun they get.

Shootin Star is an endless platformer done in a graphically retro style. You play as a star that’s trying to make its way back up to the sky. The controls are very accessible, by simply holding on the screen, your release directs your projected angle. There’s a nice tutorial that breaks everything down, and various weapons with certain effects, such as the type of blast radius, act as sorts of power-ups. While the gameplay is rather minimal, the leaderboards give you that “one more try” feeling adding replayability. Shootin Star works great for quick mobile sessions.

Shootin star is a good arcade game with quick replayability but I feel the controls are a bit finicky and can ruin your experience. I can't help but compare it to a game I really enjoy, Downwell (but going in a different direction in this case up not down like Downwell). There isn't anything to unlock in-game or feel like you're working towards a goal (except your high score). I will give it more play in the future but it's not really hooking me as Downwell had.

I’m kind of new to the vertical endless runner, and while it’s kind of wild on my nerves sometimes, I like it. And this is no exception. By paying attention to what’s ahead of you, you can do pretty decently. It’s a simple game. Collect ammunition to keep firing your gun to keep moving upwards. Controls are simple and do what they’re supposed to do. The graphics and sound are pure retro which is okay (not my favourite trend to be honest but with a decent game like this I don’t mind it) and it’s fast and fun enough to want to keep trying. And I was amused that the first time I scored less than 150, it gave me a “Medocris Attempt” achievement. I’ve played games like this that I enjoyed more, but this is worth a shot.

There have been loads of games trying the kind of formula Shootin Star goes for. Traversing upwards(or downwards, or to the left or right) trying to get as far as possible, fail, and try again. Some games nail this making them hard to put down. For me, Canabalt, and Jetpack Joyride have stolen a lot of screen time.
Shootin Star doesn´t grip me at all, and it is hard to pinpoint exactly why. Perhaps it is the controls that I found a bit finicky.

As your star hurtles upwards you hold to power the next dash and swipe for direction. Perhaps it is the feeling that I don´t improve, or that it all feels a bit too random. Getting more ammo to travel further feels a bit random, and I can´t identify why runs go better or worse than those before. Perhaps it is casual-game fatigue where I only play those games that immediately grip me. Or perhaps it is the fact that the star-shaped character feels a bit generic.

Trying to get into the casual game top lists in 2021 is a hard prospect, and I understand that most developers dream about creating the next Canabalt, Jetpack Joyride or Flappy Bird. To nail this a game has to be quite bare-bones with controls that are easy to grasp, and hard to master. The game also has to scratch that one more go itch. Shootin Star does neither for me. 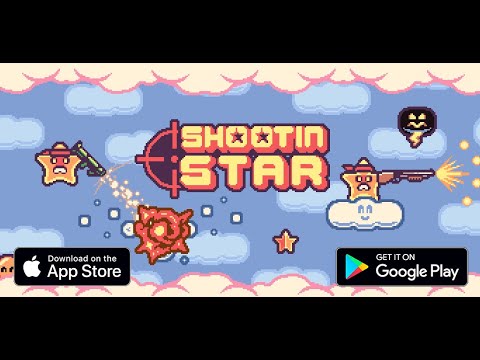 Shootin Star is a very simple endless platformer where you guide your star upwards by firing guns or bouncing off clouds. You pick up different weapons and stars as you head upwards but runout of either and you crash back to earth and end the game. The higher you get the higher the score and that’s it.

The game reminds me of reverse Downwell where instead of going down you are going up. I just wish they had copied Downwell’s controls as well as control of your star is imprecise and it often feels like pure luck you get where you are aiming for. The retro graphics are cute and the sound is functional but the controls really let this game down.

Shootin Star is sort of like Downwell in reverse with limited ammo, as you use your gun to shoot yourself up the screen rather than downwards while trying to keep enough ammunition in your gun by picking up guns and ammunition along the way to keep yourself going. The graphics are minimal as is the sound but that is the aesthetic they were going for so it is fine. The trouble is it doesn’t look that great on a big tablet screen, but I suspect this was really designed to pick up for a few minutes on your mobile phone and try and beat your previous score, so again, I guess it's fine.

The game itself isn’t really anything special, it really doesn’t make itself stand out from other endless types of games other than its quick to play and restart a game, it’s not rammed full of IAP’s to “help” you when you play and its only 20MB or so in size. It’s just start the game and play a quick game or two then come back to it again later when you want another shot at beating your old score. It’s not something that going to last you years playing, but at the price it is, you are going to get your full money’s worth (it’s only the price of a bar of chocolate) and it’s going to succeed in scratching the itch of a quick game to play to pass a few minutes here and there. So on that basis, I think it’s a fair price for the game and you will get fun out of playing it.

Next Up :
Why the Razer Edge could be the best device for mobile gaming on Android