The zombie virus running rampant through the digital corridors of the App Store is now reaching epidemic levels, with previously undead-free titles spewing out contaminated sequels to further spread the infection.

Shoot the Zombirds is the sequel to the far less spooky Shoot the Birds, and casts you as the same pumpkin-headed hero as before. This time, though, the birds are all decaying and gloopy, and you're in a graveyard.

Armed with a crossbow, it's your job to stop the dastardly dead birds from absconding with your precious pumpkids, and to score as many points as you possibly can in the process. You drag on the screen to prepare a shot, and release to fire.

Arrows are at a premium, and every shot you miss is one wasted. Sticking a bird means you get the arrow back, though, so accuracy is of the utmost importance, and it's even possible to get back more arrows than you fired by hitting multiple targets.

There are different-sized birds to take down, from lumbering turkeys to nippier crows and lightning-fast starlings. Hit enough birds in quick succession and you become a glowing berserker, scoring more points for each kill. Skulls bob across the screen as well, and shooting one of them gives you ten coins.

You can spend coins on more arrows, more pumpkids, or on increasing the number of skulls that fly across in a session. Once you've run out of ammo, or all the pumpkids have been snatched, it's Game Over.

There are various challenges to complete as you play, ranging from scoring a set number of points, to hitting birds with arrows that are on their way back down. Completing these adds to your multiplier, meaning the game isn't just about saving your kids.

As you get deeper into the game, the challenges become trickier, the birds become faster and smaller, and your arrows don't seem to last as long as they used to.

Shoot the Zombirds is a decent little score chaser, and while it's not as compulsive as other games there's enough here to keep you entertained for a good while. So long as you don't mind shooting zombies again. 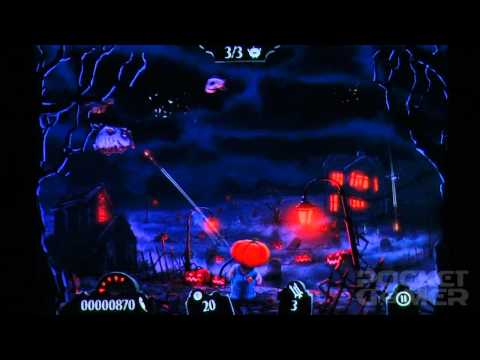 Entertaining and well-made, Shoot The Zombirds might not be particularly original or innovative, but it's very good at what it does
Next Up :
Star Discord review - "Needs polish, but it's shaping up to be a true RTS on the go"

Shoot the Zombirds for Android gets new content in 'premium' update

Official trailer for Shoot the Zombirds on Android and iOS