There are some games that just don’t click with people. I am not someone who has played Worms, but every time I talk about Sheep Squad, I get told that it is ‘just like Worms’. I have, however, played games where you launch weapons at other people, trying to kill them!

What is a Sheep Squad?

In Sheep Squad, that’s what you are doing. You and your team of characters (as you unlock the team) are looking to face off against an opponent’s team, knocking them off platforms and otherwise killing them so that you can be the champion of the map. There are a variety of different characters, each with their own different weapons to master. Some weapons explode, which does damage in an area or knocks players back, while others are a more direct - but more powerful - hit. 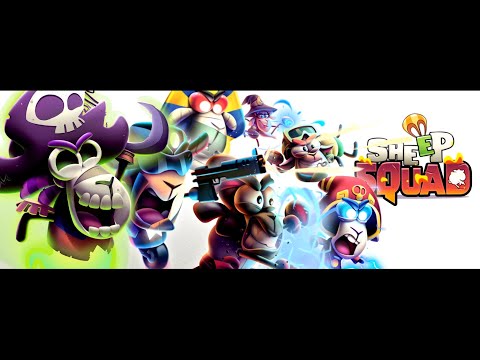 When it comes to the individual levels, there are a variety that you end up randomly playing on. These levels often have obstacles and place the two teams far apart from each other. There also are often traps - bombs that can be hit or mines that need to be jumped over, for example. There are also balloons holding power-ups like more health or weapons you don’t have like bombs. When it’s your turn, you have 30 seconds to select one character, move around, and fire once.

When it came to the gameplay, I had issues. The game does a good job of assuming you know what to do. I did not know how to move - even in the tutorial - as I didn’t know how to tap the UI to make it so there were more icons to choose from. I kept trying to attack the balloon and bounce myself with my own weapons to the drop. It took far too long to figure out my errors. This also continued to be an issue in new maps - like the Tetris map where I was not meant to get to the bottom of the screen but instead was meant to launch weapons over the walls at the other team.

It’s just that the UI doesn’t make a whole lot of sense to me and the levels themselves are somehow self explanatory. Speaking of the UI, if your main character has died, you will need to select your other character from the top of the screen, at the start of your turn, as fast as possible as the timer (which isn’t displayed until you select the next character) just isn’t shown. I have no idea who made this decision, but it just feels unfair. Default to the playable character please!

The game itself is okay, at best, once you get used to it. The graphics are colorful, I like the different animal’s skins and weapon types. The game is easy to drop into and play in short rounds, which is always good for a simplistic mobile game. There are a lot of pop-ups in the game (to rate it, to purchase bundles, to purchase premium passes to get more from chests, more chests…).

You do get chests when you win levels, though as you play more and more you will need to wait longer and longer from activating them, and without premium purchases, you will be seeing many items in your chest that you “missed out on!” by not having that premium pass. If you are thinking about giving this game to a kid, make sure that they can’t spend money on their own, as there are plenty of ways for them to spend it!

Overall, Sheep Squad isn’t a game for me. It’s possible but those that play a lot of the game Worm might really enjoy it - especially with the adorable range of animals to play with and their cool weapons, however the UI being the way it is makes the game just too challenging and hard to understand for me. Also there are a lot of pop-ups.
Next Up :
Reigns: Three Kingdoms review - "Swiping to unite China again and again"