Deck-building games are a bit like collectable card games such as Magic: the Gathering and Hearthstone. Except that instead of collecting cards and making a deck up front, you make it as you play from a random selection. It's a clever and fun sub-genre of card game that's translated well from tabletop to mobile.

Shards of Infinity is a deck-building game, but it's got some even more clever and even more fun ideas for you.

At first, it looks like a typical example. Your deck starts out full of Crystals which you can play to gain currency and buy new cards. But as the useful tutorial explains, you can spend one crystal per turn to buy another resource, Mastery.

Mastery ties into one of your other starting cards, the Infinity Shard. It does damage, and the more mastery you have the more lethal it gets. Gain enough and it'll give you an instant win, a useful timer on the game length.

Many other cards give you Mastery as well, and many others get better the more of it you have. Which pushes you right into a typical tabletop dilemma. Do you want to buy those cards and press for a mastery-based win? Or should you take another approach: thin your poor starting cards, build a card-draw engine or any of a dozen other feasible strategies.

Which is best depends on what cards are available and which you've already bought. It's always an awkward choice which will improve with time and practice. Alongside crystals and card draw, damage and health there are other facets to decision making. The cards come in different tribes which tend to synergise well together. Wrathe cards, for example, deal damage to opponents and ones in your hand often stack with ones in your discard pile. 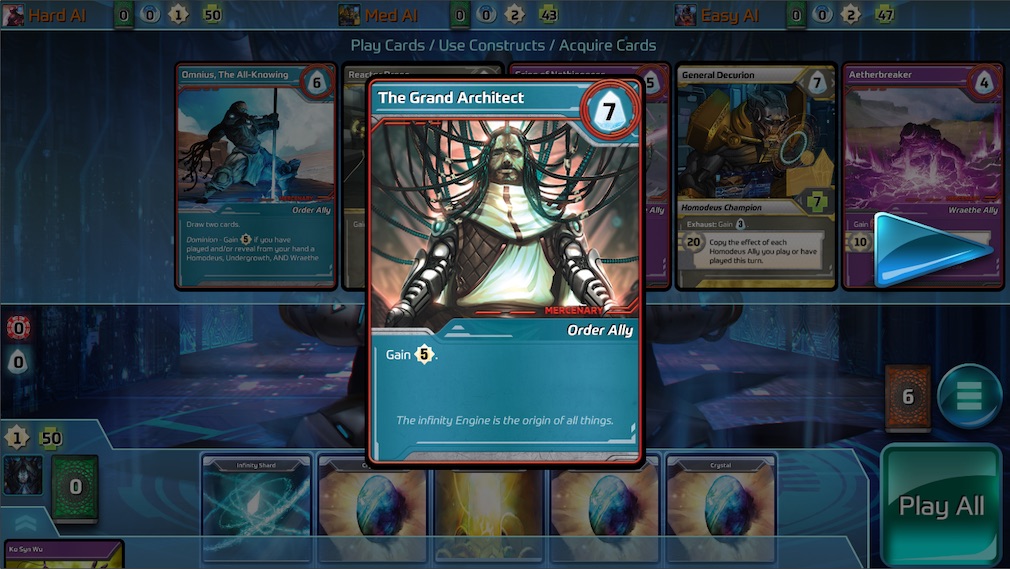 Mastery alone would make this a solid deck-builder with something new to offer. But Shards of Infinity has another twist to showcase. A cornerstone to strategy in these games is not to over-buy lest your deck get clogged with junk. As such, they tend to move from an early phase of buying cards to one of acquiring points instead. But Shards has a different plan.

You can buy many of its cards in two ways. The standard way adds it your discard pile, for later reshuffling into your deck and hand. But there's also a fast-play option which gives you the card effect right away after which its discarded. It doesn't sound much, but it's a genius piece of design.

Right away, it opens up a wealth of new tactical options. It means that builds where you just keep making a better and better economic engine to buy more and more cards are viable. It gives you a mechanism where you can deprive other players of cards you don't want in your deck. But most of all it puts healthy extra branches on the already-thriving decision tree.

Because you can keep buying and using cards right up to game end, your decisions always matter. Your deck plan can, and sometimes must, stay fluid as new opportunities to buy and play combos arise. Shards is never a game where you can relax and sit on your laurels. It rewards careful reading of the game state and making the best of all the opportunities the cards give you.

Shards has other novelties to offer. Champions are special cards that stay on the board once played. You can use them repeatedly unless an opponent spends damage to kill them rather than damaging you. Between them, these innovations catapult Shards of Infinity to the top of its genre.

Where other examples tend to be insular and splutter toward a predictable endgame, Shards stays fresh and exciting. And with most games ending when you knock opponents out with direct damage, it's interactive and works well with more than two.

Playing by app, of course, makes it easy to find all that out for yourself via online play. One reason why so many deck-building games have ended up as apps is that with their discrete turn structure, they play well online. This is no exception. All the functions you expect are here from asynchronous turns to notifications, and the lobby is thriving.

New players might want to cut their teeth against the AI first. But while the game offers three different levels, they won't prove much of a challenge once you've mastered basic strategy. And there's no additional single-player bells or whistles like achievements or any kind of campaign.

In all other respects, this is a great translation of a great game. There are even some neat tweaks in the interface to make it easier to use on mobile over the PC version. Whether you're new to deck-builders or app-based card game or whether you're an old hand, Shards has the potential to keep you playing into Infinity.

A wealth of clever tweaks to a well-worn formula fills Shards with strategy and fun, although solo play is limited
Next Up :
Evony: The King's Return review