Pick the character that's right for you with this guide

Shadowgun War Games is one of the best PVP FPS games on mobile, already. Thanks to a great cast of characters to play as, a decent variety of stages, and far more on the way in the future, it's our FPS of the year so far - admittedly, the year hasn't progressed much…

In this guide, we're going to explain every single playable character in the game in detail. Which game mode they are best at, how their secondary weapons hold up - everything you could possibly want to know. 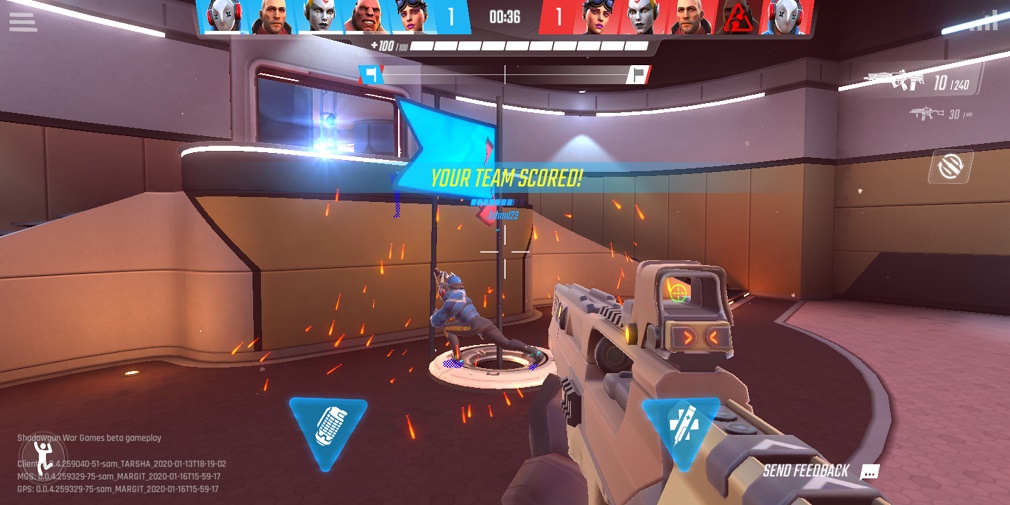 Now that that's out of the way, take a look below for the lowdown you need on all of the playable characters in Shadowgun War Games.

Slade is a consistent, excellent starter character that should mop up enemies in Team Deathmatch, and can come out on top in pretty much any 1v1 situation, as long as you play your cards right.

Slade doesn't have the highest damage output thanks to his weapons, but his grenade ability allows you to put out big splash damage on a group of enemies before shooting them all down. Couple this with his ability to regen health, and Slade is an incredibly strong and capable hero.

He is essentially the good all-rounder, and as long as you keep your health topped up when it's important, you will find yourself getting loads of kills and rarely getting deaths. A great character to start with.

Sara is a dedicated support character, and she won't be as capable in a firefight as some of the other characters. Standing in place and shooting will kill this character very quickly.

She comes equipped with rockets which are powerful, and accurate shots can clear up enemies, but she shouldn't be relied on solely. She is a support character through and through, and should be healing and sticking close to other characters. She's great to escort the flag back to base.

Her secondary weapon might feel easier to use than her rockets, but her secondary gun is fairly inaccurate and won't kill very easily. She's built for rockets, healing, and staying near the back. Use the bubble shield if you need to run in a pinch.

Revenant is a big boy, and as such, he's built to tank damage - though he's not quite the brutal tank you'd like him to be.

Revenant has good damage output, solid abilities, and a relatively easy to use weapon. But as of right now, he feels hamstrung thanks to his size, and the amount of recoil his gun has.

He has two abilities, a shout which can stop nearby enemies in their tracks, and an inner rage ability, which halves both the damage you give and take, allowing you to live longer and support the rest of the team. Revenant is incredibly strong, but he'll get taken down easily when outnumbered.

Willow is a skilled sniper, which also means she has a low amount of health, and she shouldn't be going front-and-centre in any firefight. She will just die.

But her sniper is incredibly powerful and accurate, allowing accurate players to take care of an entire team with very little issue. Her secondary weapon is also shockingly strong and capable, meaning Willow is never completely defenseless.

Her abilities are a Flash Mine, which can be placed to bamboozle opponents with a bright flash, and a Supercharge for her sniper bullets, causing extra damage for a limited time. Lovely.

Jet is all about speed, and nothing matters quite as much. As a result, while he can quickly navigate Team Deathmatch games and come away with a fair few kills, he is built for Capture The Flag.

His first ability allows him to phase out of reality, walk around a bit, and then pop right out again (Madfinger: nice work changing the animation. I see you). This allows Jet to safely escape gunfire, or move through the stage less obviously. His other ability shoots him forward, which dashes past enemies and can be used when you need extra speed.

Here's a thing though: while the phase ability can be used while you're carrying the flag, the sudden dash does not work with the flag, and you will drop it.

0/5
Next Up :
Is Raft Survival Ocean Nomad a multiplayer title?