You can’t deny that this spin-off from the loveably dumb shooter series captures the spirit of its inspiration. Determinedly - even dementedly - one-note, with a crazy sense of humour, it’s Serious Sam to a tee.

This time, however, you aren’t playing as the chisel-jawed hero but one of his familiar enemies, the Beheaded Kamikaze. Your job is to pursue Sam, dodging obstacles en route to blowing him into pieces of all-American beefcake.

Like a headless chicken you run automatically, with just two commands to worry about. Press the left side of the screen and you’ll jump. Tap the right and you’ll kick. Keep your left thumb depressed and you’ll jump higher and farther.

You won’t want to press your right thumb down for too long, however, as kicks increase your Rage meter. Should this fill completely, the action will slow down temporarily. Kick again and you’ll explode, losing a life.

'Don't kick' would seem to be the logical solution to this issue, but the game’s pace is such that certain obstacles are hard to avoid by simply jumping. Besides, a few stages require you to boot missiles into the fleeing Sam to slow him down.

The main objective never changes from level to level, but you’ll be given additional tasks to fulfil which yield substantial point bonuses. You might have to punt 45 missiles, smash through 30 cacti, or hit Sam with bombs before catching up with him.

After beating a few levels you’ll find your rage meter cools quicker, while other stages increase the number of power-ups, like extra lives and multipliers. However, as the number of hazards increases throughout, these simply give you more of a fighting chance than any noticeable advantage.

Despite the game’s breakneck pace, lost lives can’t ever be blamed on anything other than your own slow reactions or lack of skill.

The controls are immaculate, allowing you to instantly respond to any situation, whether it’s a double-jump to prevent a deadly landing or a mid-air kick to deflect incoming rockets.

The action is brought to life with an appealing visual style scratched in pencil-crayon that’s reminiscent both of Croteam’s original designs and Terry Gilliam’s animated work for Monty Python.

Meanwhile, the occasional quip from Sam and the screams of the Beheaded Kamikaze provide authentically silly audio backing, along with the melodramatic theme tune that soundtracks every stage.

Indeed, the only real complaint is how repetitive it all is. Bar the background, nothing really changes from start to finish, and as such there’s little real sense of progression.

You can brag about your best scores on Twitter and Facebook, and there’s support for both OpenFeint and Game Center if achievements are your thing.

But otherwise Kamikaze Attack! is your stereotypical Serious Sam game – fun for a short blast every now and again but unlikely to remain in the memory for much longer than the time it takes to complete a level or two. 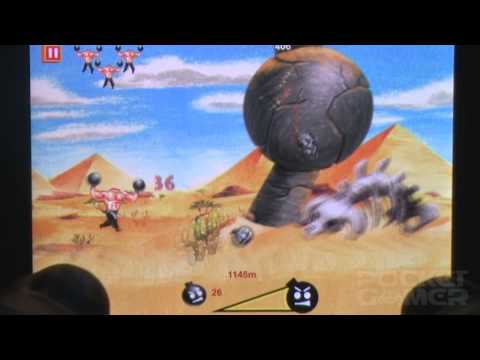 Fittingly shallow and suitably silly, this auto-runner is one of the better examples of the genre, if still limited in its appeal
Next Up :
Pawnbarian review - "A minimalist roguelike that's hard to put down'"

Blow up the vile Serious Sam