A quick glance at the screenshots may give you cause for concern. Surely this can't be yet another Angry Birds clone? Surely we've pinged enough animals across brightly coloured environments for one lifetime?

But it only takes one level of Saving Private Sheep 2 to make all those concerns slip away. While it certainly owes a debt to Angry Birds, it's a very different experience.

The setup is simple. You play as an army of sheep who use catapults to fire hedgehogs with the aim of spiking the dastardly fox who's trying kill and eat Private Sheep.

Eschewing trial-and-error, Bulkypix's sequel is a predictable and measurable affair. Each level has a smattering of sheep dotted around, and you ping the hedgehog between them like an erinaceous puck.

They can ricochet off walls, arc over spikes, and generally bounce around in a snappy and satisfying manner. To fire a hedgehog you pull it back and ping it like an elastic band.

Taking out the fox involves planning and spatial awareness, rather than just aiming and hoping. You have to analyse the best angle and trajectory for each hedgehog shot, and figure out the best path around the level.

Getting to the fox makes you feel clever rather than lucky, and there's distinct satisfaction to clearing out a map without losing a single hedgehog (you've got three to play with each time).

Reach for the stars

As is the norm in iOS gaming these days, you can get three stars in each level by hoovering up the coins - and indeed the star - in each map.

They often take you well out of the way of your final goal, but they're always obtainable without losing a hedgehog. A large part of the fun is working out just how you're going to grab them without sacrificing one of your spiky missiles.

In many ways, Saving Private Sheep 2 is a richer game than Angry Birds, although it doesn't have the personality or the curiously compulsive hook.

Still, if you're after something a little more considered in your animal-flinging iPhone life then Saving Private Sheep 2 might just be the game for ewe. (Sorry.) 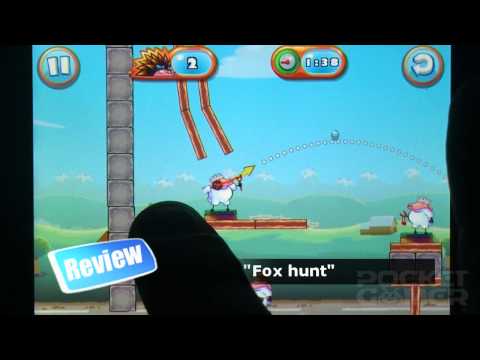 Saving Private Sheep 2 is a smart physics-puzzler in a familiar outfit
Next Up :
Catalyst Black review - "Gorgeous visuals, smooth gameplay and fun-filled fights"