I consider myself a bit handy at rhythm-action games: the quirkier, the better. I’ve helped Parappa The Rapper learn to believe in himself, and saved the world with the Elite Beat Agents and their Japanese equivalents in Ouendan.

Yet, the Russian Dancing Men had me hurling expletives at my iPod touch on a regular basis. Even if you think you know rhythm-action, this game will seriously test your metronomic mettle.

It comes from the folks behind the Weebl’s Stuff website, and all the songs that play as you guide your Kossack troupe through hazard-filled environments will be familiar to the site’s fans. I am the monkey, I can go anywhere

If the words 'Magical Trevor' mean anything to you, or you remember the directory enquiries advert which featured a reworded version of said tune, you’ll know the kind of soundtrack to expect.

This humour extends to the game’s presentation, with a thoroughly daft story involving your crouch-kicking tribe of Soviet soldiers. The story sequences are short, sharp, and very, very funny - which makes the game’s mechanical flaws all the more disappointing. Initially, it all seems very simple - at the bottom of the screen lie four icons, which you tap at the right time to vault obstacles, step over pits, leap spikes, and whizz around loops.

The main issue with this is that the difficulty curve is sharp and gets progressively steeper. Even on Easy mode, you’ll be dying with alarming regularity, as you repeatedly crash into obstacles you have little time to react to.

You begin with three followers, but they’ll deplete every time you make a mistake. By contrast, you’ll need to make several perfectly timed hops, steps, jumps, or loops to earn another. No Russians The view zooms out in direct relation to the number of men you amass. This makes the game considerably easier, as obstacles appear sooner for you to react to. But, if you lose a couple of troops - thanks to the almost ludicrously exacting timing requirements - it’s all too easy to say goodbye to the rest in short order.

It doesn’t help that almost all of the songs change rhythm frequently, speeding up and slowing down to disrupt you. Others just don’t seem well-suited to a rhythm game.

That some of the obstacles don’t fit with the beat of the song makes things even worse. And there’s a perceptible delay when playing without headphones that means perfects are much harder to achieve.

With earbuds inserted, things get a little easier, meaning you can rely more on the visual cues (a brief flash of light when your leader is in the right place to move). In Soviet Russia, game plays YOU But when the game transitions to a different set of obstacles, it can be hard to react quickly enough, particularly as the buttons are small and need to be pressed quite firmly for your actions to register.

The need to repeat stages in rhythm-action games isn’t a concept that’s new to me (I’ve completed Gitaroo Man, after all), but the comedy tunes here just don’t have the same impact after umpteen airings. I so desperately wanted to love Russian Dancing Men, yet aside from the presentation and humour, it left me cold with its unforgiving difficulty curve and apparent lack of internal rhythm.

If you’re a fan of the Weebl’s Stuff website, then you should probably give Russian Dancing Men a try. Be prepared for a frustratingly tough time mastering it, though. 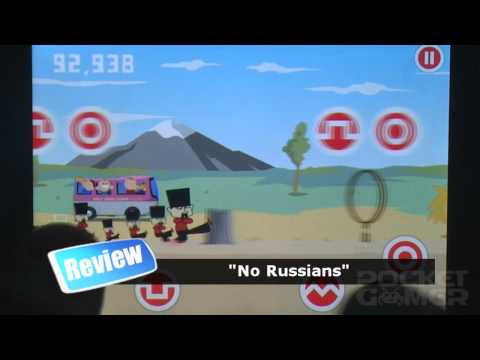 A few tweaks and Russian Dancing Men could be the rhythm-action game to beat on iOS. As it stands, it's too flawed and frustrating to recommend
Next Up :
Valiant Hearts: Coming Home Netflix review: "A touching war story from various angles"