When it boils down to it, there's an awful lot of simple fun to be found in Runic Rampage.

Its bursts of extreme violence are engaging, and while it's not the best looking game in the world, there's still an awful lot to like about it.

Sure, it's just another 3D, isometric dungeon crawler, and it's sometimes a little too afraid to break away from the bonds of the genre, but if you're looking for a crunching good time, you could do a lot worse than checking this one out.

You play as a grumpy dwarf with a massive hammer. Your village has been attacked by some sort of magical plague, and it's up to you to find the cure and murder anyone who gets in your way in the process.

To be honest, the plague-curing does seem to be secondary to the slaughter. Each level lasts a few minutes, and involves you wandering around hitting goblins in the face until they explode into a shower of gore.

The longer the combo of hits you manage to chain together, the more extreme this violence is. To begin with the gobbos just sort of slump, 30 hits in you're treated to almost full-screen fountains of blood and chunks of viscera. 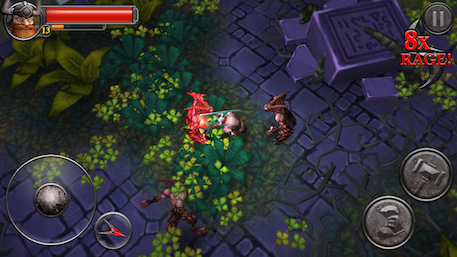 It's an interesting visual cue, and it's one of a few nice touches that the game throws at you. You find spells as you fight, and can unleash them to power up your weapon. You might add a poison bonus to your attacks, or suddenly be able to freeze enemies with a single hit.

Most of the levels end with a little boss fight. Smash the big bad and you can unlock the chest. By hitting it, obviously. You can only take three things with you though, so making wise choices about your rewards is key.

Things do get a little repetitive after a while. Your moveset doesn't expand from what you're using in the first level, and while the spells and levelling up are a nice touch, the game does end up feeling a little stodgy.

But while things are still fresh you're going to be having a whale of a time. And even when the game starts to sour a little, the challenge level means you're going to want to push on just to show yourself you can do it.

No, Runic Rampage isn't perfect, but it's one of those seven out of ten games that definitely deserve a closer look.

And if you're a fan of dungeons, beards, and wholesale butchery, then you're going to love it.

A clunky but ultimately entertaining dungeon crawler that does what it sets out to do with aplomb
Next Up :
Catalyst Black review - "Gorgeous visuals, smooth gameplay and fun-filled fights"