Rubix is a beautifully presented puzzler that's based around its namesake the Rubix Cube. Players have to match the colour of the cubes to the base they're perched upon, which is not as easy as it sounds. So, we let our App Army see if they could solve the plethora of puzzles Rubix offers.

A puzzle game built on the concept of a Rubix cube. Instead of making all sides of a cube into the same colour, Rubix gives you a series of squares and asks you to match them with the colour of the base. Each puzzle gives you a certain number of turns and in each turn, you can change the colours three times. It gets progressively more complicated as you go, but it never feels too difficult. The solution is generally very simple and you may feel rather dumb when you find it.

Also, my son absolutely loves Rubix cubes so I gave the game to him to play and he played it nonstop for two hours. It's got his recommendation as well.

I like this game. It is simple, neat, and elegant. The controls work perfectly, the graphics are pretty, and the puzzles are challenging and require thought. My only gripe is that the single mechanic can get a little monotonous. This is a game best suited to short play sessions. In the end, it does exactly what it set out to do. And that is something that relatively few mobile games accomplish. 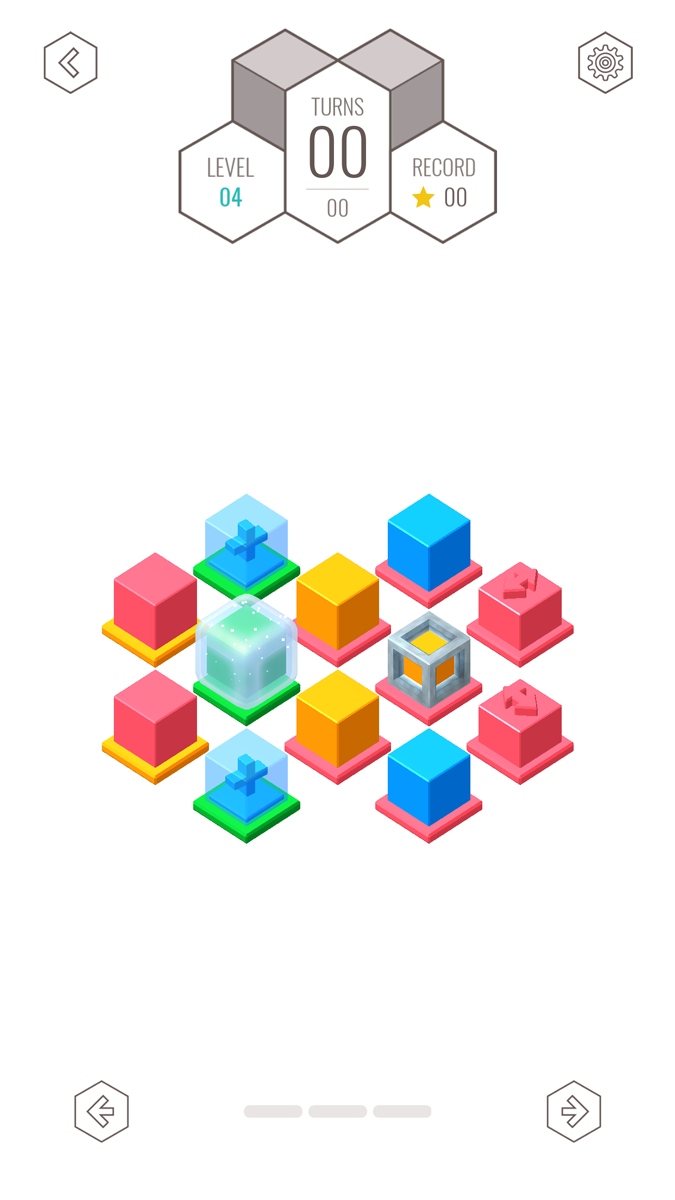 I found this puzzler both intriguing and frustrating. The aim of the game is quite simple - to turn all the cubes to the same colour as their bases.

As with most games, it was simple, to begin with, but as I progressed there were levels where I could see a pattern to follow and achieved the goal, and some levels that seemed obscure and I progressed more by luck than actual skill. That said, I enjoyed the game on the whole and I think it would appeal to puzzlers in search of a challenge.

Well, not much to say about Rubix. It’s a well presented, albeit graphically simple puzzle game where you tap on cubes in an attempt to have them be the same colour as the base they sit on. The game starts off easy enough but as the difficulty ramps up I was often just tapping on the cubes randomly to get past a level. If you are a puzzle game fan then you will probably love this, if not then frustration will rapidly set in.

The Rubix cube has always been an enigmatic beast to me, like algebra and calculus, sometimes you get a solution by trial and error, but in attempting to replicate your success you find that you still don’t grok it. The Euclidean games have given me more advanced tools for block manipulation, I now know where to send a block if I want to bring it back to a different spot. My understanding still lacks the unconscious competence of someone who can see the solution of a Rubix Cube by looking at it.

Rubix takes the Rubix Cube and strips it down to layers. Beginning with simple puzzles like three blocks in a row consisting of a colour, with another colour at the base. When you tap a block it lifts up off its’ base and changes colour while affecting the blocks next to it if you tap on them they will lift/drop while affecting their colour and the colour of their neighbours, or nothing might happen at all, for some reason blocks can become locked because other blocks have been manipulated. 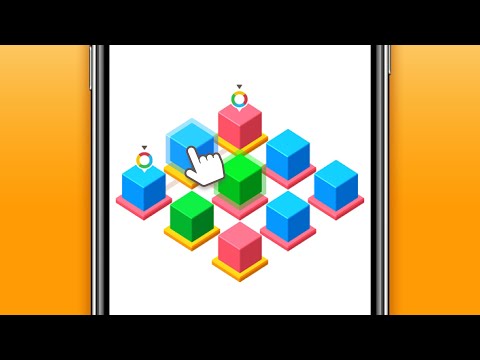 There is a tutorial that has a floating hand indicate to you which pattern you ought to solve the puzzle in. Tapping on blocks in the indicated pattern, however, doesn’t solve the puzzle. It puts you back at square one, so you may try again, after the third time you may begin to deviate from the suggested solution, suddenly I was surprised to find a solution, unsure of what the solution was or how I got there I was led to the next level of the tutorial where the same process repeated. When the tutorial ended I felt that agitated sense of confuzzlement that struck me after an hour at my first Rubix Cube some 20 years ago.

I know that games like these have teams that work really hard and put a lot of time and effort in, so I really do try and figure out the mechanics. There is a potential here to take the mathematical structure of a Rubix Cube and teach it incrementally, but that rests entirely in The Tutorial’s efficiency at integrating those concepts. Just a hint of additional clarity in explaining the mechanics would have made a world of difference.

As it stands, I got quite far in by brute-forcing solutions, and I’m not sure what the key is to intellectual satisfaction in this game, but if you already have it, if you get Rubix Cubes, then this is the game for you. If you don’t understand Rubix Cubes you might find new dimensions to your frustrations here.

A simple and fun puzzle game with great sound effects. Its mechanics are simple and intuitive where you go through stages with increasing difficulty which makes you think a lot so you can pass the stage. Great for spending time in boring moments like in a bank queue.

Rubix is a creative and good looking game that is obviously an update of the classic puzzle. The one that I solved by pulling it apart and reassembling with the colours matching. If I could have done the same thing with Rubix, I probably would have. The gameplay is simple and the controls worked fine. Match the cubes to their bases by touching three adjacent cubes. Sounds simple, but after a while, I was just randomly trying things in an attempt to get past the level. I say to Rubix, it’s not you, it’s me. Hardcore puzzlers will love you, but you’re just not my cup of tea.

Like it's cubic namesake, Rubix is a puzzle which is easy to get to grips with and hard to master. The mechanic involves matching the colour of each of a small set of cubes to that of its base, with the catch being that you have to change three at a time, which all need to be adjacent. Just when you feel like you're starting to get it, and have learnt the sequence to change the colour of a just a single block, for example, the game introduces a new mechanic, such as additional colours, which renders that hard-to-come-by realisation quite useless.

It's one for the hardcore puzzle fans - the ones who like a fiendish challenge, and refuse to let themselves get beat by a video game. I'm not averse to a fiendish puzzle, but with Rubix, I all too often found myself just making random sequences and hoping for the best.

Like the 80s original, I enjoyed it for a while and then just got too frustrated. Unlike the toy plastic cube, I was unable to solve it by breaking it to bits and putting it back the right way round, or by peeling the stickers off and reapplying them in the "correct" places. I might come back to it but I think Rubix is just a bit too hard for me.

I picked up Rubix right when it was released since I love these types of puzzle game. The interface and tutorial are very solid. The basic controls are laid out right when you start, the concept is very simple- match the colours of the cubes to their bases. There is quite a bit of strategy involved until you start picking up on the patterns, which I am still struggling with. New cubes pop up as you move along that alters the strategies that you may have already developed. There are more levels than I can count so this one will be around for a while. Many of the levels are just filler and really are unnecessary. I like this game, I don't love it as much as games like OXXO and Scalak. Not a bad game overall and one I can recommend.