Royal Dungeon is one of those games where you've got two characters to control - this time around it's a king and a queen who are trying to escape through the titular underground prison.

But rather than a platformer, here you're running through top down mazes full of ghosts, moving flames, and deadly spikes.

Both of them move at the same time, but the queen's actions are mirrored. Swipe to go left and while the king goes left, she'll go right.

It's not as confusing in practice as it sounds though. To all intents and purposes this is a block-sliding roguelike with a few twists here and there.

You need to pick up weapons or hitting an enemy will kill you. There are keys you need to grab as well. Pick one up and the exit door opens automatically.

Sometimes the levels look far more complex than they actually are. They cover the whole screen, but with a couple of swipes you'll be out and on to the next. 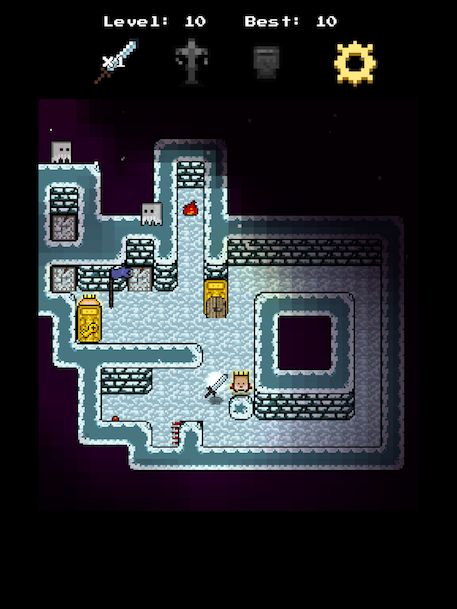 It's not so much that the game is particularly challenging, just that sometimes you'll get yourself stuck in annoying unwinnable situations.

And getting dumped back to a tricky level you've already completed gets pretty annoying pretty quickly.

That's not to say there isn't fun to be had here. But it doesn't feel so much like a head-scratcher as a game that you're consistently butting up against.

There are some nice ideas, but in the end things get a little bit too frustrating to really allow them to sink their teeth into you.

Royal Dungeon does have some nice ideas, and you're going to enjoy a lot of them, but frustration sets in a little too quickly
Next Up :
Valiant Hearts: Coming Home Netflix review: "A touching war story from various angles"