There’s no chance that you’ll forget Rocket Riot’s name once you’ve played it. A catchy jingle that simply repeats the game’s title pops up at every available opportunity to remind you.

It’s a port of the XBLA game from two years ago, and it arrives on iOS in rather slimline form, with a shorter campaign and no multiplayer options, which inevitably means it loses some of the allure of the original.

Still, you have a ridiculous array of thumb-shaped avatars to choose from. The default is a Chuck Norris look-alike, but you can also pick a ghost, an Eskimo, a robot, a squid, a panda, Freddie Krueger, a vampire, and a burrito, among others. Pixel arrrrt

The Story mode spans 48 missions, as you shoot your way towards an encounter with evil pirate Blockbeard. This involves flying around large 2.5D levels, blasting enemies with – you guessed it – rockets.

The controls are very well-translated, with your left thumb handling movement and directional swipes firing projectiles. Accuracy of the latter isn’t perfect, but the action is so frantic that precision is rarely called for.

Most levels are simple deathmatches, asking you to kill a given number of enemies, all of whom have the same abilities as you. Missile commando A few stages vary this – you might have to pick up an American football and fly it between the uprights while killing enemies, or destroy certain objects. While killing enemies.

No prizes for guessing what you have to do when the boss battles roll around.

Complete a stage and you’re given a range of stats: kills, longshots, punches, rockets fired, blocks destroyed, and your highest combo, with a rating of between one and three rockets dependent on your score, which is affected by all of the above. Voxel maestro

You’re duty bound to destroy, but despite all the explosions it’s easy to keep track of what’s going on. You, your enemies, and all projectiles are more detailed than the chunky pixels scattered everywhere.

As you zoom left and right, the perspective shifts slightly for a more dynamic look than your average side-scroller. The screens between levels are a neat touch, too, featuring a pixel-art cassette and a familiar Spectrum/C64-esque loading noise.

It's a goddamn arms race Rocket Riot can get tough on the later levels. Number 47, for example, is a deathmatch with 90 enemies, all of which are a similar colour to the background – at speed, only their weapons reveal their positions.

Also, levels rebuild themselves after you’ve blasted chunks out of them, so you’ll need to be careful not to get stuck.

There are plenty of power-ups to give you a boost, from one which temporarily increases your rocket size to another where your projectiles are replaced by (still deadly) bouncing balls. No surrender One, however, replaces your missiles with a flag that says ‘BANG’, another playful touch that creates moments of brief panic.

Without the multiplayer, it’s a lesser game than it ever was on XBLA, and it feels more repetitive as a result – though there’s still plenty of content here for 69p.

It’s a game that benefits from short bursts of play more than others. Rocket Riot isn’t a game to gorge but to snack on – the kind of title that’s perfect for short commutes or loo breaks. 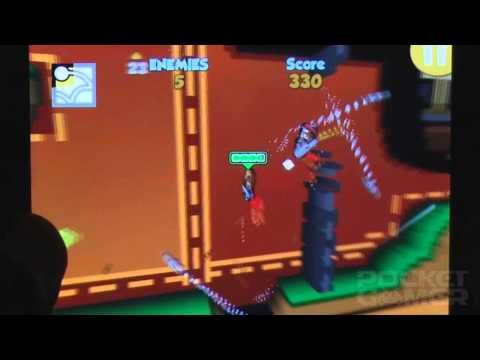 Shame about the loss of multiplayer, but for solo gamers Rocket Riot is a real blast - in bite-sized portions, at least
Next Up :
DC Worlds Collide review - "DC fan service in an enjoyable gacha package"