Rip Them Off is an upcoming management, puzzle and tower defense hybrid from developer Lozange Lab that looks to be a satire of corporate greed. We've covered the game previously when it was first announced but now we have an exclusive dev diary to share with you all that looks at Rip Them Off in greater depth.

The video, which you can see embedded below, shows players one of the first levels in the game, explaining how Rip Them Off works and the different strategies you can employ whilst playing the game. 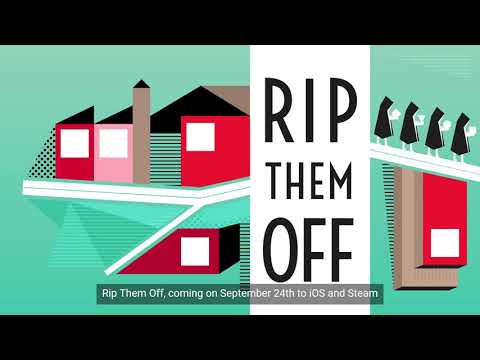 Players will begin each level by creating a shop from a choice of nine different types. Each variant can hold a set number of customers who will spend a certain amount of time and money there. Each of the people – or Dupes as they are known – will immediately enter the first available shop they walk past, if one is full they will continue walking to the next.

This will then influence which other shops you decide to build next to each other as there are quite a few factors to consider. For instance, Dupes won't enter another shop of the same type they've already visited. This could lead to a potential loss of profits but depending on how well you spread them apart and the shops you build in-between, it may still prove profitable if enough Dupes that couldn't visit the first spend money in the second.

Considering the example in the developer diary is an earlier, more simple level, Rip Them Off certainly has the potential to become increasingly more complex. Coupled with the lovely 1950s aesthetic it's definitely a game worth keeping an eye on.

Rip Them Off is available now to pre-order now over on the App Store now ahead of its launch on 24th September. It will be a premium title that will cost $3.99.

Head to the Pocket Gamer LaunchPad hub to find all of our exclusive announcements from our three-day event.
Next Up :
Space War Battle Cadet DX lets you match colours to defeat enemies, out now on Android