The site is called Zombie Singles, and has the strapline 'Official Dating Site of the Walking Dead'. User sign in, upload a photo, and then customise it with various gruesome effects.

There's also a Matchmaker feature to find your ideal guy/gal zombie, and a Bore or Gore? rating system for other users of the site. 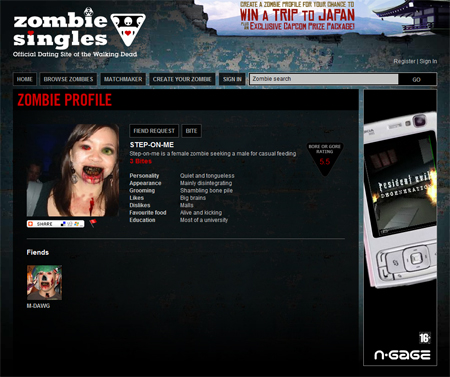 Users can also enter a competition to win a trip to Japan, N96 handsets, and an extra prize package from the game's publisher Capcom, which includes passes to the Tokyo Game Show.

It's a neat site, and a sign that Nokia is willing to put its online marketing budget behind third-party N-Gage games as well as its own titles.

The site launch follows the recent launch of a Facebook spin-off for N-Gage beat 'em up ONE.