MMO platformer racing game sounds like a bit of a hard sell, even for the most skilled salespeople.

But somehow ReRunners: Race for the World not only manages to bring all that together in a neat package, but it's also damn good fun to play.

It's a bright, beautiful world filled with things to find, hidden areas to explore, and plenty of races to win.

Get your shoes on

The premise is fairly simple: you have to run as fast as you can to the end of a level, racing against up to five other people.

You can run left or right and jump, and there's a multitude of different routes to take to get to the end, some which are faster than others.

There's coins to pick up as you go, which add to your score as well as your coffers, and can be used to level up your skills.

You also earn stars at the end of the race, and you'll need to earn quite a few to keep progressing through the game.

Handily, you don't actually need to win the race to earn all the stars available, as your coins and overall time contribute to it as well.

This means that even if you're not the best of runners, you've still got a chance of progressing through the game and not feeling held back while you're learning the game. 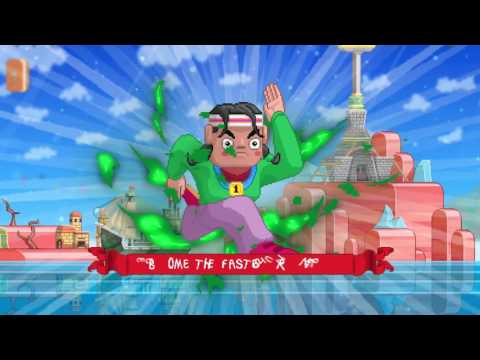 There's also exploration levels to run about in, tracking down hidden stars and talking to NPCs, and an Arena mode that acts as a ranked competitive mode for racing.

It's a lot to get your teeth stuck into, and you will, because the racing is just so enjoyable.

Your runner handles perfectly, and the level design harks back to classic Sonic levels, with its different paths, varying mechanics, and bright colour schemes.

Pebble in your shoe

Exploration levels are a little small, but there's still plenty to seek out within them, with high up areas you can only find later down the line, and dead ends to trick you.

The only problem ReRunners has is the occasional bit of slowdown, which can leave you running through digital treacle for a few seconds as it tries to catch up with itself.

But once you're out of that and running at top speed once more, any feelings of frustration just melt away.

ReRunners is unlikely to take the world by storm - its concept alone is probably a bit "out there" for the wider audience.

But if you are looking for a fast, fun platformer, you'd be hard pressed to find anything better on mobile.

It's silly, exciting, well-balanced, and a fantastically good time whether you're leading the pack or dragging behind, which is an amazing feat in its own right.

ReRunners is the Sonic game we all wanted, with a healthy dose of competitive multiplayer thrown in. Play it.
Next Up :
UFO99 review - "A fun little arcade game on the go"