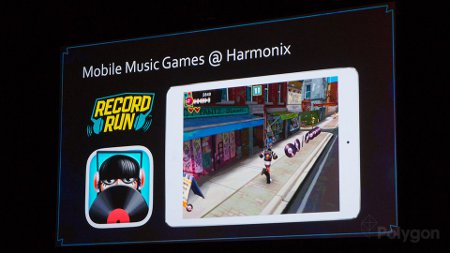 Over at PAX East Harmonix, the dev behind the Guitar Hero craze, has revealed that it's working on some mobile games.

The first of them, which should be released sometime soon, is called Record Run and is about running around and collecting records. Probably.

Apparently the game will use the music stored on your phone. This will change the gameplay, as well as giving you a cool soundtrack that you know you're definitely going to like. Maybe you'll have a dance.

We don't know much more about the game, other than that it'll be free-to-play and will mix auto-running with beat-matching rhythm gameplay.

And Harmonix has said that it's also making a bunch of other prototypes for mobile, and showed off a short video featuring thirteen games it's working on. Some of them are "very different".

We'll let you know as soon as we get any information about Record Run, or any of the other Harmonix Games. Honest we will.

Polygon
Next Up :
Pokemon Go and Amazon Prime Gaming's latest rewards bundle is now available and it features a mysterious reward