Endless-running games are remarkably good at creating an atmosphere. Whether it's the neon madness of Whale Trail or the stark, crumbling dystopia of Canabalt, more often than not you feel like you're sprinting through a fully realised world.

That's one thing that rComplex gets right. Its red and black visuals create a disorientating, twisted vision of a deserted city, with flashes of blue and green alerting you when the next obstacle needs to be traversed.

Unfortunately, a shoddy control system and a level of cruelty that surpasses even some of the toughest examples of the genre let down what could have been a very interesting iOS game.

Based on a 2009 PC game of the same name, rComplex casts you as a trenchcoated stranger, fleeing through an empty city from tentacled creatures intent on your destruction. The story is told in fragments, picked up as you sprint away from the cloying gloom.

At your disposal you have a shotgun with a limited number of shells and a scythe attached to its barrel. Shooting the darkness buys you a few feet of space, while the single-use scythe lets you cut your way out should you become ensnared.

There are bullets scattered around the levels to replenish your supply, and extra scythe attachments too, but no matter how tooled up you are your main concern is collecting a set number of memory cubes while traversing the obstacles the game scatters in your path.

Blue objects need to be slid under, and green ones need to be leapt over. Their garish colours clash with the red and black of the rest of the game in an attempt to give you time to react and keep you one step ahead of the writhing mass of liquid night.

You swipe a finger up the screen to jump, and swipe it down to slide. It's simple enough in theory, but in practice the controls aren't tight enough to keep you ahead of the monstrous creature.

Sometimes swipes don't register at all, and you barrel into a desk or some scaffolding. The timing required to perform a jump changes dramatically from obstacle to obstacle, too, leaving you floundering in mid-air or leaping way too early.

One step forward, two steps back

It's entirely possible to disentangle yourself from the beast's clutches, only to run straight into an obstacle you had no chance of avoiding. This leaves you entangled again with no hope of escape. To add insult to injury, you have to sit through an unskippable death scene before getting kicked back to the start of the level.

It's such a shame, because rComplex has some great ideas. The way it slowly feeds the story you, and its use of text instead of traditional ways of displaying ammo and health are all unique and interesting features.

With a few common sense tweaks, rComplex could be one of the very best running games out there. Its world is one of the most enticing and visually challenging to date, but it's sorely let down by a broken control system and numerous almost impassable obstacles. 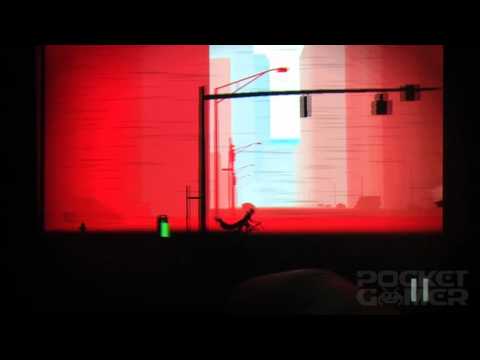 Win an iPhone, a free copy of rComplex, and a T-shirt designed by famous graffiti artist the Art of Chase