Playing Rayman Jungle Run is like performing a complicated piece of music. Unlike most platformers and endless-runners it's not so much about sharp reflexes as it is about learning the rhythm and timing of the stages.

So, at first glance, it might look a bit like Canabalt. Our loose-limbed hero Rayman automatically dashes from left to right, and your only real control is to tap the screen to make him leap or to spring off walls.

But, unlike the infinite and randomly generated layouts of your typical endless-runner, Rayman's 40 levels are hand-crafted, 30-second-long stages.

So while your first run-through will certainly test your wits and reflexes, the next time you play - this time, on the hunt for 100 golden Lums - you'll need to learn the layout of the level. You'll need to know the timing of every trap, which jumps to make and which to avoid, and the very moment a slide is going to break off into a pit of thorny vines.

Your second (or third, or fourth, or 17th) attempt will then be a well-orchestrated, well-choreographed dance, expertly informed by every failed attempt that came before it. It's a sweaty palm, white knuckle thrill to be applying those lessons, and nailing every jump just as memorised.

Those rare successful runs are euphoric explosions of satisfaction, as retrying a level 20 times finally pays off. That's something that comes into especially sharp focus on the unlockable Land of the Livid Dead stages, where simply getting to the finish line is challenge enough.

That sheen is slightly tainted by the second lot of levels, where Rayman can use his helicopter-like hair to momentarily float mid-jump.

It leads to some new challenges, sure, but it breaks that one-tap immediacy of the early levels. You get this fuzzy, imprecise safety net to fall back on, and it's not quite as satisfying.

It is, quite simply, the perfect way of bringing Origins to mobile - no dodgy virtual joypad, and it's perfectly suited to short, social dabbling. 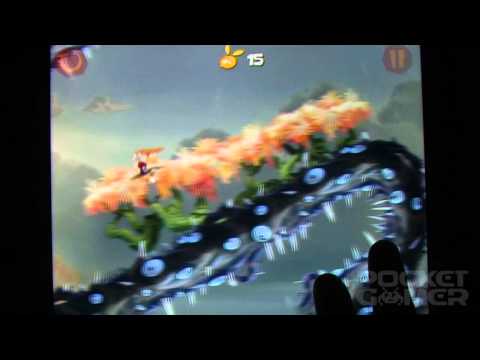 Rayman Jungle Run is an outstanding example of bringing a franchise to mobile. This fast, tense, beautiful game is everything you loved about Rayman Origins, now perfectly suited to touch
Next Up :
Honor 50 review - "Great for social media fans, and a strong show from Honor"