Taito’s incredible track record in the coin-op shooter genre means that any release from the company is likely to generate a reasonable amount of interest.

RayForce (also known as Gunlock, Galactic Attack, and Layer Section) is no different, despite being one of the firm’s less-famous moments.

However, its unique selling-point is the addition of a lock-on laser, which allows you to target enemies that can’t be destroyed with your conventional cannons.

This mechanic is a direct evolution of the multi-plane shooting seen in Namco’s crusty old Xevious. It’s also been copied by countless games since, including the likes of Panzer Dragoon, Rez, and Child of Eden.

A ray of light

When you consider that RayForce was built with a traditional stick-and-button control system in mind, it should come as no great shock to learn that the process of porting it to iPhone has compelled Taito to tinker with the interface somewhat. To move your ship, you simply touch the screen and move your finger in the direction you’d like it to go.

Two control modes are offered up: iPhone and Arcade. The former makes things easier as your ship moves as fast as your finger. The controls aren’t location sensitive, either - you can touch anywhere on the display and then move your finger and your ship will dutifully shift in that direction.

Arcade mode limits the pace of movement, making it an authentic facsimile of the coin-op but also much more frustrating, as you have to match your finger gestures to the speed of the ship - easier said than done when you’re attempting to negotiate a hail of enemy fire.

Automatic for the people

Because you have two shot types, Taito has also had to give special consideration to the way the auto-fire system is handled. You can choose to automate this entirely, so your basic cannon fires continually and your lock-on lasers are unleashed as soon as you have a target in your sights.

With the manual mode enabled, things are a little more challenging. You can toggle the basic shot auto-fire on and off, but the lock-on weapon is only called into play when you tap the relevant button.

As well as including these control configurations, RayForce also sports two view types: Zoom and Original. Zoom fills the iPhone’s screen, but it results in slightly fuzzy graphics.

Arguably the best way to appreciate the game’s 2D splendour is the ‘Original’ option, which not only maintains the pixel-sharp resolution of the arcade cabinet but also affords a large space at the bottom of the display, offering ample room to control your craft without obscuring the action.

Being able to carry around an arcade machine that most gamers would have given their right arm for back in 1993 will deliver a considerable buzz to coin-op veterans, but the iPhone conversion isn’t without some technical hitches.

When RayForce embarks on some of its more visually alluring flights of fancy - which include Mode 7-style rotating play fields and scaling sprites - the performance takes an unfortunate hit. The slowdown isn’t fatal, and it’s perfectly possible to keep playing through it, but the effect is rather unsightly.

Another massive stumbling block is the price that has been slapped on the game. £7.99 (at the time of writing) is an obscene amount of cash by App Store standards, especially for a release that is comfortably out-paced in visual terms by many rival iOS shooters.

RayForce remains a solid example of an old skool coin-op blaster, and the lock-on mechanic makes it different enough to stand out from the crowd. However, the steep cost is a massive barrier to entry, and while we can see fans of the original game digging deep into their pockets for this, newcomers and casual players are unlikely to get value for their money. 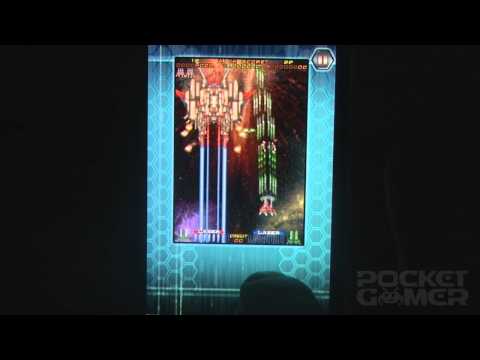 RayForce delivers coin-op shooting action straight out of 1993, but technical niggles and a ridiculously high asking price mean that it’s unlikely to find a wide audience on the iPhone
Next Up :
Roller Drama review: "Scheme with your team, skate great"