Where Temple Run borrowed its atmosphere from the Indiana Jones series of films, Rail Rush goes one better, lifting the mine cart sequence from the end of Temple of Doom and repurposing it as an endless-runner.

It's a move that proves surprisingly effective. Rail Rush might sit on the been-there, done-that end of the originality spectrum, but it provides such an entertaining diversion from the drudgery of everyday life that it's easy to forgive.

You play a fedora-wearing adventurer trapped in a mine cart. It's your job to guide the rickety cart along a series of rails, jumping over obstacles and collecting chunks of gold until you inevitably plough into a wall or topple into the gaping abyss below.

Swiping left and right switches rails, while sliding a finger up will send you leaping over blockages, and sliding downwards ducks you underneath barriers. Tilting your device leans you left or right, letting you collect lumps of precious metal and avoid low hanging signals.

The gold you collect can be spent on one-off bonuses, such as supports for the front of your cart that let you smash through obstacles, or sticks of TNT that clear the path ahead for a set distance. You can buy extra gold with real-life cash, too, but it's never necessary.

As you roll along, the game gradually speeds up, until you're swiping and tilting almost constantly, weaving a treacherous path along the rails with your heart in your mouth and a smile on your face.

You'll crash, a lot, but Rail Rush never feels unfair. The controls are smooth, and the collision detection is generous, meaning you'll escape from all but the most terminal of scrapes. If anything, the game is a little too easy for its own good.

Despite that, crashing into a cave wall or cracking your skull open on an overhang still makes you want to try again, and on that count Rail Rush is up there with the best examples of the genre. Everything about it entices you to try again.

This is a polished piece of portable gaming, and while it may not be the most original game on the App Store it's still more than worth a download. 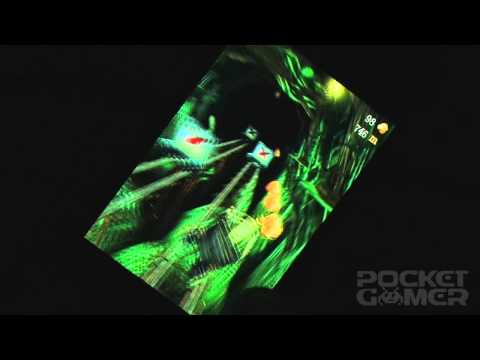 Well put together and an awful lot of fun, Rail Rush is a tad too easy, but it's still an excellent entrant into the endless-runner genre
Next Up :
Streets of Rage 4 mobile review - "Worth the twenty-seven-year wait"