Let's get something out of the way right here - at time of writing, Monster Hunter is not available for PS Vita in any form.

Until that game finally rolls around, you've got a few imitators of the basic "grab giant weapons and slay equally giant monsters" gameplay available - and Ragnarok Odyssey Ace is at the front of that pack.

It's not a perfect game, but it's still a fine contender for your time if you've always wanted to cast down the giants of Norse mythology with a sword the size of a small station wagon. 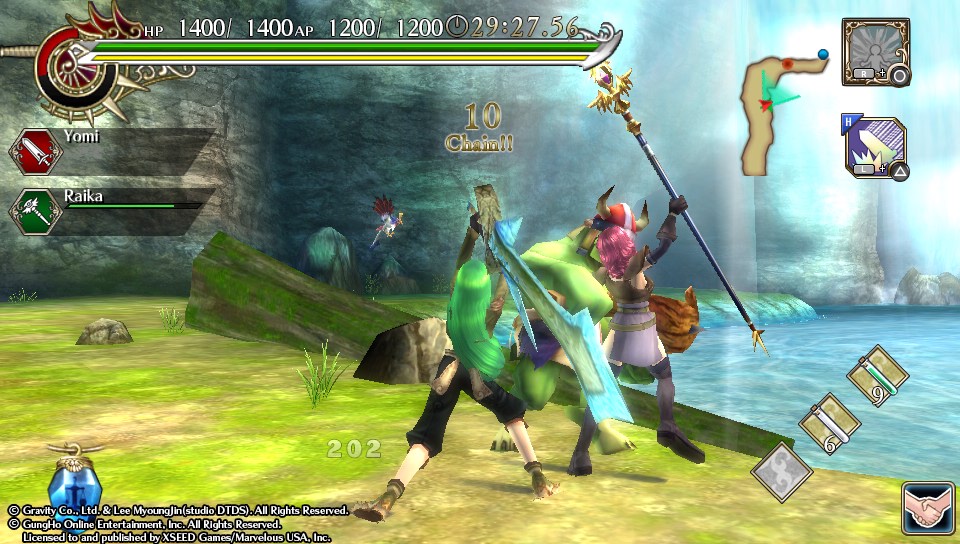 It's important to stretch before, and during, battles

After selecting your character from a list of MMO-style classes (Hunter, Cleric, etc.) you're given the chance to customise their look. Don't expect too much and you'll enjoy this part of the game.

Once your character's sorted, the main story is delivered through a string of text boxes, and it boils down to the following: there are some evil giants stomping around and the kingdom is in peril.

It certainly isn't the sort of epic you'll remember ten or even two years from now, but chances are you won't even notice because Ace is a ton of fun at the outset.

Within minutes of starting your adventure, you're shunted off into the wilds with your comedically large weapon held high and a vague list of enemies to kill.

It's sort of like being handed a broomstick as a kid and being guided towards a piñata - you can't believe people are letting you get away with this, but you're having too much fun to question the finer points. 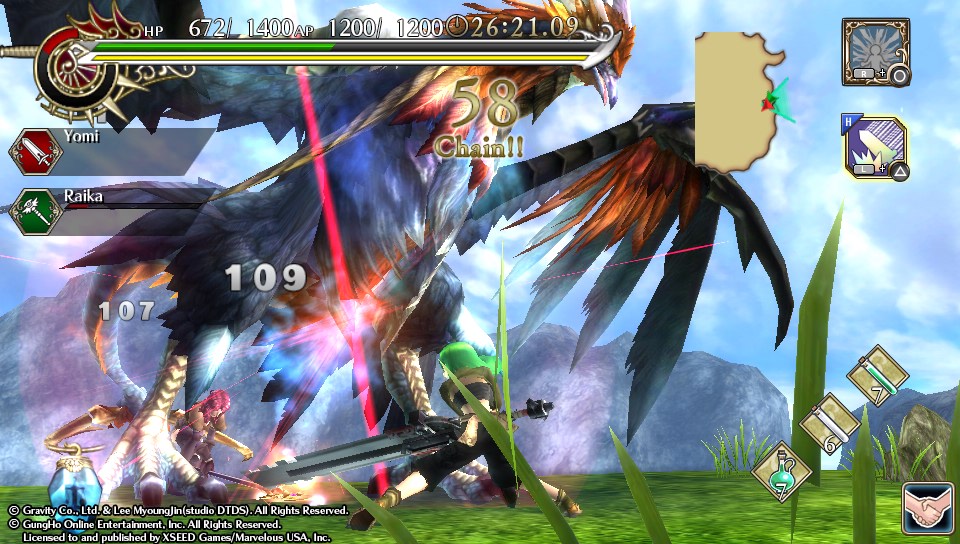 Don't call him a piñata to his face

Once you're out and fighting, Ace really hits its stride.

Attacks map out to the Triangle and Circle buttons, but there's a surprising complexity to combos and timing that makes the system feel much more robust than it is.

Still, Ace is an ARPG at its core - so routine combat rarely progresses past bashing things until they fall over and drop loot.

When you encounter larger foes - giants and demonic hawks, for example - you'll need to pay attention, study their attack patterns, and learn to use your special abilities intelligently if you don't want to eat dirt.

Figuring out these challenging foes is easily the best part of Ragnarok Odyssey Ace, although a close second would be the amount of customisation options you have in your character's outfits and abilities.

The latter is accomplished through a fleshed out Card system that allows you to modify stats and abilities with incremental bonuses. By sticking a few cards in your outfit's slots, you can improve your attack power, stagger resistance, or even give your attacks an added status effect.

With all this going for Ragnarok Odyssey Ace, it seems like it’d be a great game - right? 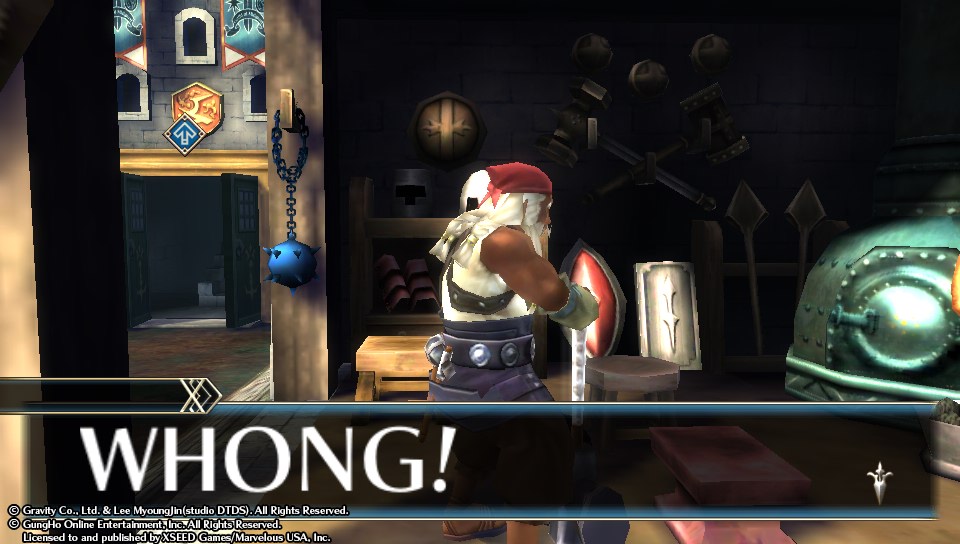 Well, maybe not so much…

Unfortunately, it falls short of greatness in a few key areas, with the most notable being the repetitive nature of its missions.

Swinging huge weapons against a field full of monsters is fun early on - but you'll begin to feel routine set in as you plod through the same zones, running past the same assortment of enemies, looking for the special fight that'll let you clear whatever mission it is you're currently on.

Ace does its best to keep the missions interesting - by sending you back to zones you haven’t been to in a while or populating areas with new monsters - but the unchanging level layout and monster spawning areas makes the wide world of Ace feel claustrophobic.

Thankfully, the game's graphic performance is great all round.

It handles almost flawlessly on the Vita and you won't notice any stutters, skips, or slowdowns from the PS3 version - we tested multiple missions with Cross-Save just to be sure. 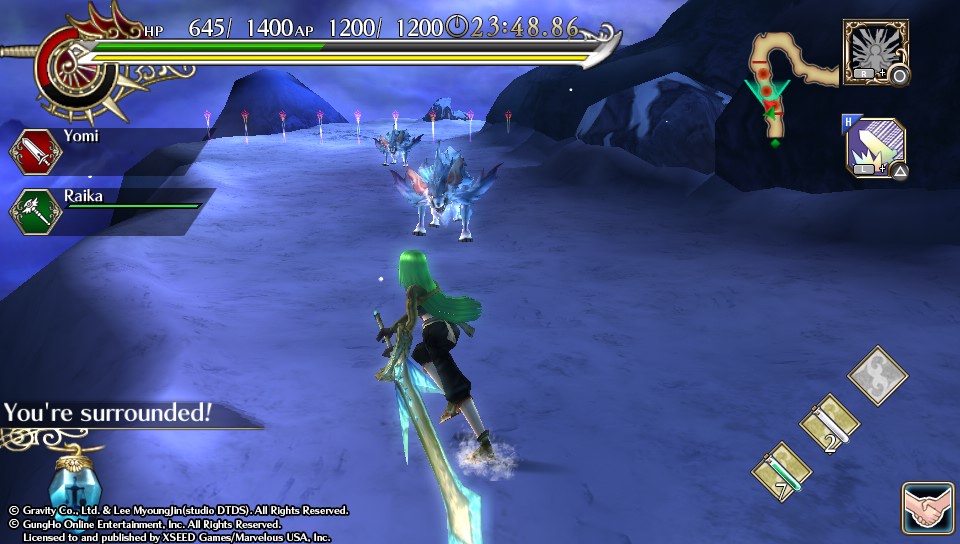 Surrounded, here, meaning "there are two wolves in front of you"

While Ragnarok Odyssey Ace introduces plenty of new tweaks over the original Ragnarok Odyssey - like the ability to hire AI-controlled mercenaries to help out with missions - it still doesn't do enough to make its world more complex or engrossing.

Between missions, you'll rarely do more than grab a few potions or check in to see if your gear can be upgraded - and the town hub still feels like a wasted area populated by lonely NPCs.

Still, there's plenty of enjoyment to be had in Ace.

Its straightforward gameplay is quite refreshing, the music is excellent, and you'll probably feel a rush of adrenaline during some of the more difficult fights.

Just spend your time with Ace sparingly - or else its grandeur will quickly fade into tedium.

Although Ragnarok Odyssey Ace falls into many of the same pitfalls as its predecessor, it still offers a fair amount of fun if you don't overthink it
Next Up :
Alien: Isolation review - "Chestbursting fun in the palm of your hand"