As you can see from the exclusive screenshot to the right of this paragraph and the video below, the forthcoming title - set in London after a series of mysterious McGuffin Rockets land - packs some pretty nifty visuals. In fact, the game looks like it's been ripped straight from a cartoon or the page of a comic book.

WarChest itself focuses on releasing "high-quality" titles. Specifically, high-quality titles that you can download for free.

"Gamers are well served by high-end console games, but sometimes over-charged by mid-tier titles, or under-served by low-quality free-to-play games that unfairly exploit the player. We believe gamers deserve better, and that's why WarChest is exclusively focussed on publishing games that are AAA and free," Richard Jolly, CCO of WarChest, said.

"For WarChest's games, our goal is connectedness - you might battle your friends via your smartphone or tablet in a turn-based tactics game during your commute, connect with them on your PC once you're home, sneak into their base in their absence while playing on your console, and then share cool technology with them from your desktop browser at work," Paul Wedgwood, WarChest's CEO, added.

RAD Soldiers will arrive on the App Store for the iPhone and iPad in June. 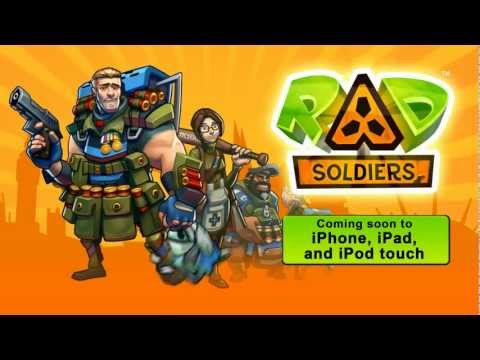 You are cordially invited to a Party in Rio

Prepare to party in Rio thanks to incoming RAD Soldiers update