The deftest puzzle game developers can craft levels that leave your eyes darting around the screen, searching for the key to solving the conundrum you've been presented with.

Puzzlejuice takes that one step further, blending together three seemingly disparate strands of puzzle gaming history to make a frantic concoction that forces your brain to think in ways that it's never been asked to before.

Mix in an infectious soundtrack and a cheeky, colloquial style and it feels like everything's in place for a puzzling revolution.

Hip to be square

The game starts with a tutorial that introduces you to its trio of mechanics piece by piece. First, angular Tetris-aping blocks fall down the screen. Tapping rotates them, swiping moves them left to right, and sliding down drops them into position.

Each of the pieces is made up of smaller squares of different colours. Match three or more of the same colour and then tap them and they change from colourful shapes into lettered white squares. The same happens when you build a straight line of any coloured blocks from one side of the playing area to the other.

Now you have to trace a line between the letters to make words of three characters or more, all the while guiding shapes and watching colours. The longer the word, the more points you score and the more blocks you clear from the screen.

It sounds like chaos, but in practice developer Asher Vollmer just about manages to pull it off. The blocks move slowly enough that you're never overwhelmed too quickly, and the simple controls let you concentrate on the task at hand.

Bombs, ice shards, and drills further complicate matters. Including the power-ups in chains of disappearing blocks gives you a boost, letting you clear more of the screen or take a well-earned breath and consider your next move.

The triumvirate of styles gel together surprisingly well, but the panic and desperation you'd expect them to engender never really materialise. In spite of its outward appearance and boasts, Puzzlejuice just doesn't pose enough of a challenge.

Easy to work out

It's a shame, because the premise is a solid one, and the overall package is impressive. The game is still fun, and there are moments when its promise is fulfilled and the blocks are stacking up ominously.

There just isn't the design to back up the great mechanics, though. It's too easy to clear out blocks with a succession of cheap three-letter words, so while longer letter chains do more damage you rarely go looking for them.

Puzzlejuice has an intriguing and well-built core concept, but the game around it doesn't live up to that idea. A lack of variation confounds what is ultimately a valiant but flawed effort. It's fun, it's addictive, but the promise of revolution remains disappointingly unfulfilled.

Puzzlejuice never manages to be more than the sum of its strange combination of parts. 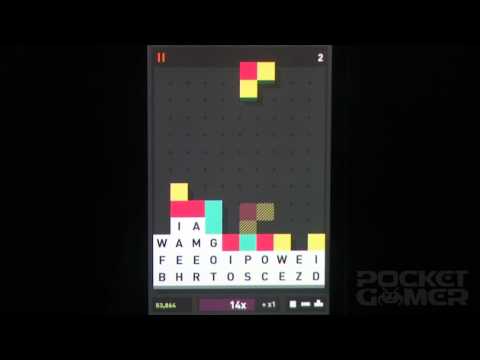 A fun and diverting puzzler, Puzzlejuice offers a new style of play, but doesn't quite have the chops to back up its brain-punching claims
Next Up :
Netflix Desta: The Memories Between review - "Pass the ball and conquer your dreams"

Puzzlejuice gets Impossible mode, as developer was haunted by Pocket Gamer's review