Whenever you come across a game that features futuristic racing, it seems to make the assumption that drivers a hundred years from now will be bloodthirsty speed demons more concerned with covering the tarmac with their opponent’s brains than crossing the finishing line in first place.

As you might gather from the rather jolly title, Protoxide: Death Race most definitely conforms to this viewpoint.

Boasting an impressive line-up of anti-gravity racing ships, it sees you dashing around a series of grim industrial tracks whilst hurling rockets, mortars, and bombs at your fellow competitors.

Needless to say, such unsporting behaviour would be frowned upon in Formula One, but it does at least lead to slightly more exciting contests than we’re accustomed to witnessing these days.

Steering your ship is a matter of tilting your iPhone left and right. Acceleration is automatic, while braking is handled by an on-screen button. Nitro boosts are also engaged via a touchscreen command, which can then be replenished by picking up the canisters that are scattered around the circuit.

Other items to look out for include speed boosts, shield recharges, and, of course, weapons. At the beginning of a race, you have no armament whatsoever – all of your tools of death must be collected over the course of a lap.

Each weapon has its own characteristics: some are powerful and will knock a rival out with one hit, though these are usually slower and more difficult to land successfully. Other rockets are deployed in batches and have a less dramatic effect, but they’re swifter and generally easier to handle.

You have no control over when your weapons fire. Instead, you must wait for a lock-on target to appear. After a few seconds of solid lock, your ship will release its deadly payload, but you must ensure that your enemy’s ship remains in your sights or the lock will fail, and you have to start all over again.

Naturally, your enemies aren’t sitting ducks – they will retaliate whenever possible. A warning sign appears when missiles are incoming, giving you ample time to trigger your defensive shield.

Although it only lasts for a short while, it’s strong enough to repel the unwanted attention of your foes. Once used, it takes a short time to renew, leaving you exposed (unless you happen to pick up the aforementioned shield icon, that is).

Protoxide: Death Race boasts a career mode that offers up objective-based races with a very loose plot underpinning the action. These events are actually quite demanding, forcing the player to destroy a certain number of rival racers and finish above a specified position.

When playing against the computer, the limitations of the Artifical intelligence are glaring. Should you lie at the back of the grid, it’s insultingly easy to get into first place, yet when you’re sat at the front of the pack, you always have a rival right on your heels no matter how many nitro boosts you deploy.

This kind of ‘rubber band’ AI isn’t new to racing titles, but it feels cheap and leads to frustrating races.

Playing against human opponents over a local wi-fi connection removes this particular problem to a degree, but it doesn’t make Protoxide: Death Race’s combat-heavy driving any more enthralling.

There are better examples of the genre on the App Store, so unless you’re a die-hard fan, we’d recommend you save your fuel for more worthy candidates. 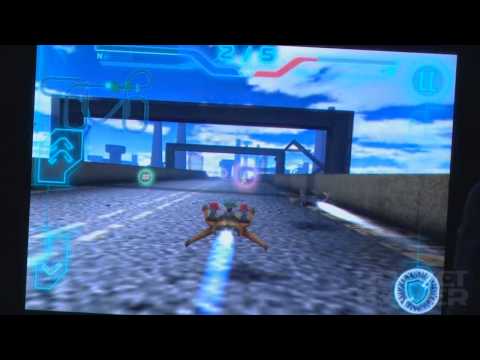 The online mode shows promise, but cheap computer-controlled opponents and a curious lack of excitement make Protoxide one for dedicated combat racers only
Next Up :
Roller Drama review: "Scheme with your team, skate great"